REVIEW: Intiman’s “The Scarlet Letter” doesn’t get an “A”… Mother of Pearl! Could “Burlesque” be any gayer? Cher...

The Film Column for Friday, November 5

Crazy weather and crazy politics. Who can make sense of it all? Why even bother? Let’s all retreat to the dark comforts of a cozy movie theater with an XXL bag of buttery popcorn and a 32oz corn syrupy and tax-free soda. Together we can get through the next couple of months.

127 Hours directed by Danny Boyle, starring James Franco and Amber Tamblyn. Based on a grisly true story, Franco plays a happy-go-lucky backpacker who accidentally gets pinned beneath a bolder and resorts to “desperate measures” in order to survive. Oh Lordy. Despite apprehension, the initial reviews are saying that Boyle and Franco handle the material surprisingly well, and rather than tedious and nauseating, the film is fast-paced and compelling. Rumors that preview screenings caused people to pass out have been debunked, but you still may want to shield your eyes from time to time. 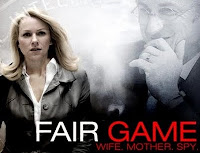 Fair Game directed by Doug Liman (Bourne Identity) starring Naomi Watts and Sean Penn. No, this isn’t a remake of the gloriously bad Cindy Crawford/Billy Baldwin sexy thriller, but rather a dramatic interpretation of the events surrounding the Valerie Plame scandal from the past decade. When her husband finds evidence that claims of Iraqi weapons of mass destruction were intentionally fabricated, members of the president’s inner circle out Plame as a covert CIA agent in order to deflect attention. Several lives are ruined. Feel outrage and disgust with the Bush Administration all over again! Fun times.
For Colored Girls directed by Tyler Perry, starring Janet Jackson, Anika Noni Rose, Whoopi Goldberg. It’s a big day for gay cinema when Janet Jackson gets to shine in another starring role. Many years ago little Janet on the set of Good Times must have thought she’d always be starring in the motion pictures, but 30 years later on, she’s one of the unlikeliest leading ladies. Here she is acting real hard and channeling her inner Damita Jo in John Singleton’s Poetic Justice from 1993.

Lucky for Ms. Jackson she found a friend and champion in Tyler Perry, the mainstream director with the most sexual hang-ups, at least until Tom Cruise decides to direct. Zing! Unfortunately for everyone involved the early reviews of Perry’s new one have been not so good. Time magazine says:

Tyler Perry’s… For Colored Girls does feel like a ghoulish joke, a dated horror show bordering on parody. It’s both operatic and tone deaf, with explosions of hysteria that include a drunken Macy Gray performing a back-alley abortion and the conversion of a poem spoken by [Ntozake] Shange’s Lady in Purple into an actual opera by Perry’s regular composer Aaron Zigman (called La Donna In Viola). During the opera, the film cuts back and forth between a doomed couple silently watching the performance (the husband is on the down low, unbeknownst to the wife) and another character being savagely date-raped.

Yikes! Perhaps we’ll be seeing this at Jason Miller’s Bad Movie Art one day soon.
Now On Blu-ray
The Sound of Music (1965) directed by Robert Wise. This is an important release for all the Julie Andrews queens out there. If you don’t know any Julie Andrews queens, take a look through your DVD collection, and if you find a copy of Thoroughly Modern Millie or Victor Victoria, you probably are one. Here’s a missing scene restored for the special edition Blu-ray:
Screenings in Seattle

Burlesque Launch Party at the Lobby. On Thursday Capitol Hill’s bumpin’ Lobby Bar will host the Burlesque launch party, where you can have the opportunity to win passes for a special November 18th preview screening. The Burlesque marketing team has been handing out tons of preview passes to gays and lesbians around the country with the hopes that it will create good word of mouth buzz and gain a cult following. What an obvious marketing ploy! Not that I’m one to complain. You know I’m gonna beg, borrow and steal to make sure I get preview pass, but even without one the party on the 11th should be a good time.
Ryan Hicks is sponsorship manager for Three Dollar Bill Cinema, a film fan and a contributor to Seattle Gay Scene.