He spent a chunk of last spring in Seattle and about a year later, iconic singer/songwriter DAVID BYRNE plans on a return visit.

The frontman for the seminal 70s/80s band TALKING HEADS, David Byrne was here last year to work on the musical HERE LIES LOVE, the odd theme park ride like examination of the life of Imelda Marcos, the notorious First Lady/co-dictator of the Philippines for a large chunk of the late 20th century that was restaged at Seattle Repertory Theatre.

While I enjoyed the EXPERIENCE of participating in the joyride known as “Here Lies Love” on its opening night; the show is gorgeously designed with a young and very talented cast, I did have some issues with the ethics of the piece and the fact it rather glorified a problematic woman while also negating her considerable power. But, it was a joy to experience and more so since David Byrne stood about 5 feet away from me during a large chunk of the performance, and sang along to his own songs.

Yesterday, Seattle Theatre Group announced David Byrne is scheduled to do a show at the Paramount on May 24, 2018. He’ll be doing new material plus older songs including Talking Heads hits. 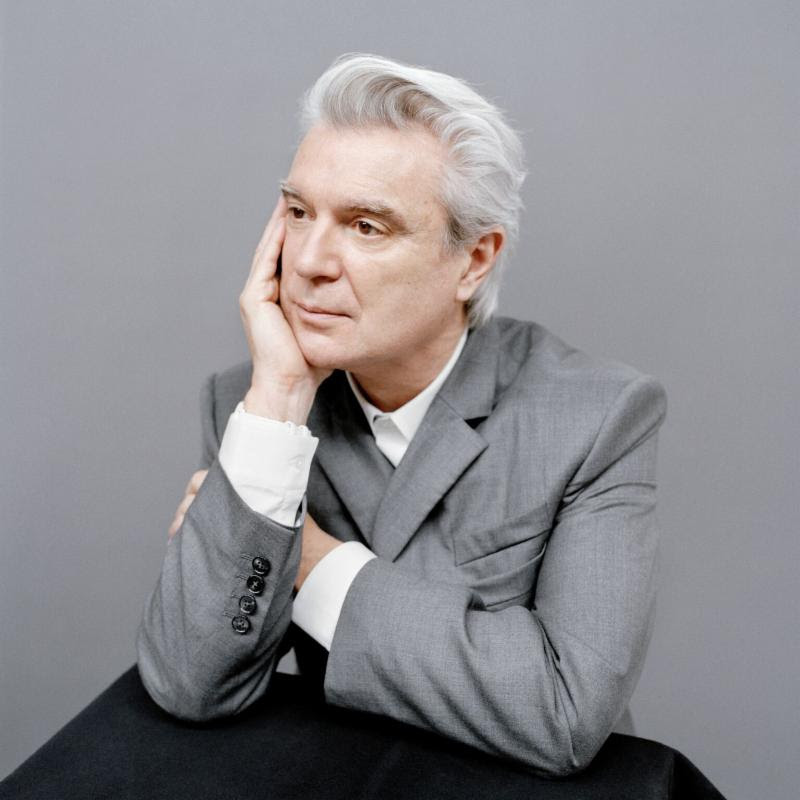 David will be performing songs from his new album American Utopia, out March 9th, as well as classics from his solo career and days with the Talking Heads.

Performing with David will be an 12-piece untethered band.
“We’ll be doing some new songs… and many others that will, I assume, be familiar. I’m excited. This is the most ambitious show I’ve done since the shows that were filmed for ‘Stop Making Sense,’ so fingers crossed.” – David Byrne

My Biography by David Byrne

I was born in Dumbarton, Scotland. It was what was called a breech birth … which often means butt first … which was probably exceedingly difficult for my mother and may have been indicative of a bad attitude on my part. I was there, but I don’t remember.

My parents had what was called a mixed marriage, which made life difficult. And there was little work in Scotland in those years. We moved to Canada on a boat, the QE2, when I was very young and after some years in Hamilton, the family moved to Baltimore, where I had my primary and secondary education. I loved art class and was asked to leave the school choir. I played guitar in a band with some friends; I think Ricky Brewster was the singer. At a high school battle of the bands, a rival band pulled the plug on us. We lost the contest.
I wanted to be able to study both art and engineering-as I saw creativity in both areas-but that didn’t seem possible, so I went to art school in Baltimore and Rhode Island. There I encountered people with backgrounds very different than mine. Very different class, cultural, and economic backgrounds. This was all new and hard to understand at first. I made music at the same time I was at art school, but not having training, I never considered it as a career. For a while I wore old suits and had a beard-local children in Baltimore asked if I was “one of those people who didn’t ride in cars.” I hitchhiked around the U.S., stayed on a commune and busked for money … but eventually I came back East, discovered I could write songs, and with some friends we played at art school events and parties. I moved to NY with some wild art-related ideas-one was a sort of rating system for the arts influenced by the books on cybernetics and systems theory that I was reading. I reconnected with my friends and we auditioned at a local club playing our own songs. A handful of people liked us, and so we stuck to it and surprisingly soon we were playing our music all over the world. I still do this from time to time, it’s hugely enjoyable. I have been lucky to be able to do these things.
Though music took up much of my time for many years, I eventually went back to re-engage with the visual side of things-directing some films and making picture books, art, and installations. I lived in L.A. for a while but now spend most of my time in NY. I began riding a bicycle as a way of getting around, and I wrote a book using those experiences as a way to talk about the things I saw. I made some custom bike racks for NY, for BAM, and for Stanford University. We need places to lock up.
I then wrote a book about music, or rather the contexts that shape and affect music.
I love working with other people. Though there are sometimes forks in the road, for the most part the convoluted path is worth it as together collaborators often end up somewhere neither expected. I wrote two musicals about powerful women-Imelda Marcos and Joan of Arc. When it works, a song can express a character’s inner feelings in ways that go beyond words. Songs help us understand things in a different way. There have been collaborations with Robert Wilson, Twyla Tharp, St. Vincent, Fatboy Slim, De La Soul, and Brian Eno. Recently I conceived and presented a show that brought together ten musical acts and ten colorguard teams.
Now I’ve made a record that just has my name on it but is also the result of the contributions of many other people. I suspect that like me it is asking what are we like, what do we want, and what are we looking for.
David Byrne