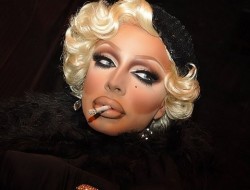 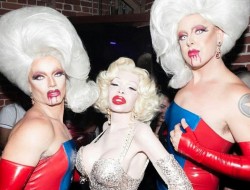 The Boulet Brothers Set To Conquer Seattle At PrideFest…And,... Jackie Beat to step in for Chi Chi LaRue as an announcer at Seattle Pride’s Parade this Sunday, June 28, 2015.

Sadly, due to illness, acclaimed gay personalty CHI CHI LARUE has had to be replaced as host of Seattle Pride’s 2015 Pride Parade scheduled for this Sunday, June 28, 2015. LaRue, who doubles as an internationally known DJ as well as an award winning director of adult entertainment, will be replaced by the legendary drag star, JACKIE BEAT!

EVERYTHING you need to know about Jackie!

JACKIE BEAT recently celebrated her 25th anniversary in show business. During that time she has appeared in countless TV shows including “Sex And The City,” and many motion pictures — everything from “Flawless” with Robert DeNiro and Phillip Seymour Hoffman to the campy cult classic “Gingerdead Man 3: Saturday Night Cleaver” opposite a homicidal cookie. When not traveling the world with her live show, this Writers Guild member has written for fellow performers such as Roseanne Barr, Sandra Bernhard, Rosie O’Donnell, Ross Matthews, Jennifer Coolidge, Kate Flannery, the late great Joan Rivers and more. Her stand-up comedy has been seen on Comedy Central, VH-1, MTV, Logo and more.

Miss Beat has also written for many magazines, appeared in several Off-Broadway shows, performed on too many Atlantis Gay cruises to count and was a member of the electro rock band Dirty Sanchez. She is looking forward to touring with Lady Bunny, Sherry Vine & Bianca Del Rio in the much-anticipated show “National Treasures.” Ethel Merman will belt her way into your heart this Friday at The Unicorn for GAY AS FUCK!

The delightful San Francisco performing legend ETHEL MERMAN will be added to the GAY AS FUCK bill to provide an extra shot of entertainment. The big belter known for her Mermanesque voice will undoubtedly offer up a Nirvana song or two in tribute to her appearance in The Emerald City. The entire family can check out Ms Merman and her band when they perform at Seattle PrideFest this Sunday.