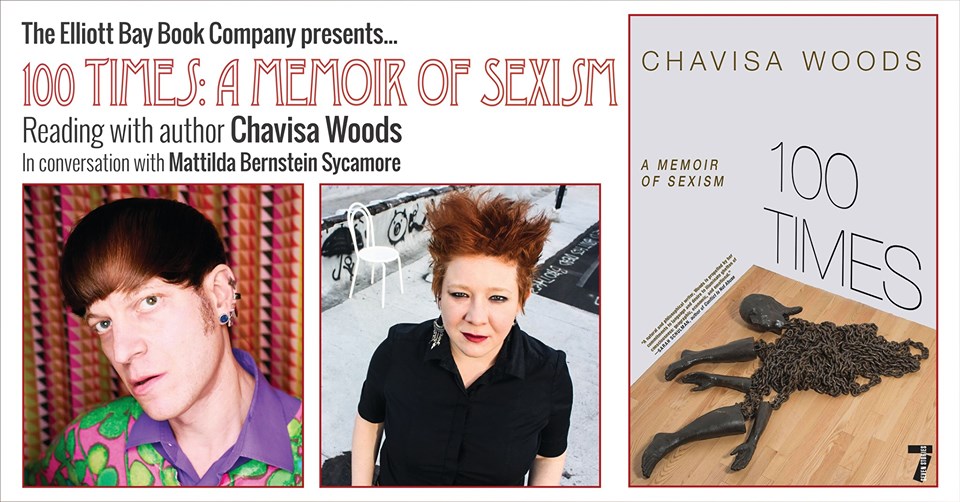 Join us at Elliott Bay Book Company to celebrate the release of 100 TIMES: A MEMOIR OF SEXISM by Chavisa Woods. Author Mattilda Bernstein Sycamore will join Chavisa for a reading and conversation.

Recounting her experiences with sexist discrimination, sexual harassment, and sexual violence—beginning in childhood, through the present—Woods lays out clear and unflinching personal vignettes that build in intensity as the number of times grows. Individually, and especially taken as a whole, these stories amount to powerful proof that sexual violence and discrimination are never just one-time occurrences, but part of a constant battle women face every day.

Demonstrating how often people are conditioned to endure sexism and harassment, and how thoroughly men feel entitled to women’s spaces and bodies, 100 Times forces the reader to witness the myriad ways in which sexism and misogyny continuously shape women’s lives, and are built-in facets of our society.

ABOUT THE AUTHORS:
Brooklyn-based writer CHAVISA WOODS is the author of the short story collection “Things to Do When You’re Goth in the Country” (Seven Stories Press, 2017), about which Booklist, in a starred review, wrote, “This book is tight, intelligent, and important, and sure to secure Woods a seat in the pantheon of critical 21st century voices;” the novel “The Albino Album” (Seven Stories Press, 2013); and the story collection “Love Does Not Make Me Gentle or Kind” (Fly by Night Press, 2009). Woods was the recipient of the 2014 Cobalt Prize for fiction and was a finalist in 2009, 2014, and 2018 for the Lambda Literary Award for fiction. In 2018 Woods was the recipient of the Kathy Acker Award for Writing and the Shirley Jackson Award for Best Novelette. Woods has appeared as a featured author at such notable venues as the Whitney Museum of American Art, City Lights Bookstore, Town Hall Seattle, the Brecht Forum, the Cervantes Institute, and St. Mark’s Poetry Project.

MATTILDA BERNSTEIN SYCAMORE is the author of three novels and a memoir, and the editor of five nonfiction anthologies. Her memoir, The End of San Francisco, won a Lambda Literary Award, and her previous title, Why Are Faggots So Afraid of Faggots?: Flaming Challenges to Masculinity, Objectification, and the Desire to Conform, was an American Library Association Stonewall Honor Book. Her new novel, Sketchtasy, was named one of the Best Books of 2018 by NPR Books. Her next book, The Freezer Door, a lyric essay about desire and its impossibility in current-day Seattle, will be published in fall 2020.