Alvin Orloff and Trebor Healey Reading Together in Seattle 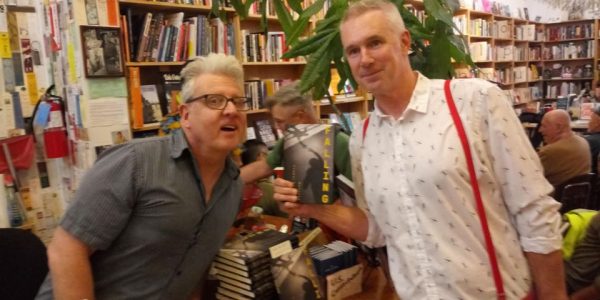 Alvin Orloff began writing in 1977, while still a teenager, penning lyrics for The Blowdryers, an early San Francisco punk band. He spent the 1980s working as a telemarketer and exotic dancer while concurrently attending U.C. Berkeley and performing with The Popstitutes, a somewhat absurd performance art/homocore band. In 1990 he and his bandmates founded Klubstitute, a floating queer cabaret devoted to the ideal of cultural democracy that featured spoken word, theater, drag, and musical acts. In 1995 the club, whose staff and patrons had been ravaged by AIDS epidemic, closed its doors and Orloff suddenly remembered that all he’d ever wanted to be was a writer. He subsequently published three rather whimsical novels, I Married an Earthling, Gutter Boys, and Why Aren’t You Smiling? before producing his memoir of life in the queer underground during the height of the AIDS crisis, Disasterama! Orloff currently works as the manager of Dog Eared Books, a literary hot-spot in the heart of San Francisco’s Castro District. He lives in San Francisco. www.alvinorloff.com

Trebor Healey is the recipient of a Lambda Literary award, two Publishing Triangle awards and a Violet Quill award. He is the author of three novels, A Horse Named Sorrow, Faun and Through It Came Bright Colors; a book of poetry, Sweet Son of Pan; and two previous collections of stories, A Perfect Scar and Eros & Dust. He co-edited (with Marci Blackman) Beyond Definition: New Writing from Gay and Lesbian San Francisco and co-edited (with Amie M. Evans) Queer & Catholic. www.treborhealey.com/fallingtour.blogspot.com

PRAISE:
“Disasterama! takes us deep into the 80s and the daily creative resistance that saved the culture’s soul during the plague years. With wit and flair, Orloff gives us a guided tour of the era’s vibrant subcultures and glittering, pointed reactions to a cold-hearted status quo. Heartbreaking and hilarious, sexed-up and political, Disasterama is a deeply personal coming-of-age story.”
—Michelle Tea, author Against Memoir, Valencia

“Trebor Healey has shown us in these utterly original stories how the English-speaking part of the Americas confronts the Spanish-speaking part. In The Orchid, he has written a masterful exploration of the inner politics of Argentina. This is a wise, brilliant story that will be read for many years to come.”
— Edmund White, author of A Boy’s Own Story