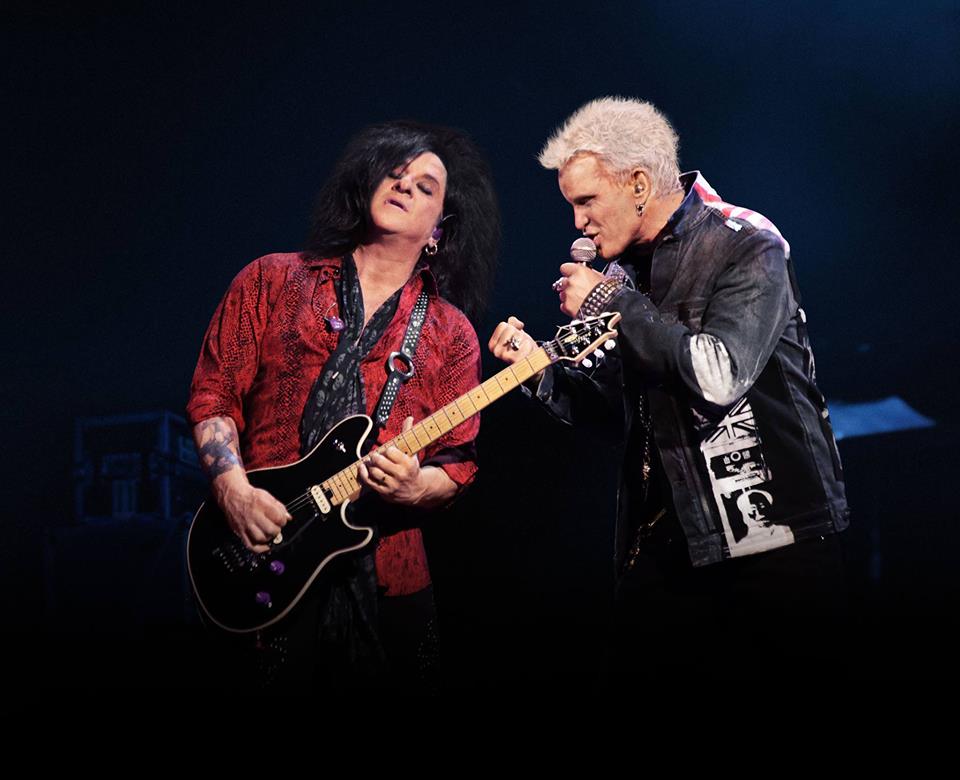 Billy Idol, together with Steve Stevens at his side, was an early architect of the sound, style, and fury of punk rock. His lip- curling sneer and fist-pumping persona vaulted him into the mainstream as one of MTV’s first megastars, making him one of the most recognizable faces in pop music, while selling out arenas everywhere he played. He has sold 40 million albums while scoring numerous platinum albums worldwide, nine top forty singles in the U.S. and 10 in the U.K. including “Dancing With Myself, “White Wedding,” “Rebel Yell,” “Mony Mony,” “Eyes Without A Face,” and “Flesh For Fantasy.”

Billy is responsible for some of punk rock’s most memorable, literate, and evocative moments and created a pioneering new sound by bringing the spirit of ’77 to the dance floor, going on to fashion an immediately identifiable musical blueprint that integrates club-land throb, rockabilly desperation, and rock’n’roll decadence.

Steve Stevens is one of the most versatile guitarists & songwriters to emerge from the 80s rock scene, with influences spanning from classic rock to flamenco. In addition to his legendary career with Billy Idol, Stevens has worked with some of the biggest names in music, from Michael Jackson to Robert Palmer, Joni Mitchell to Pink. Stevens won a Grammy Award for his work on “Top Gun Anthem” and his songs can be heard on countless soundtracks including “Once Upon A Time in Mexico” and “The Matrix” Trilogy.

Billy Idol, together with Steve Stevens, returned to the spotlight in the fall of 2014 with two high profile releases that marked the latest chapter in the long and remarkable story of a musician, an inventor, a survivor, a father, a son, a man who returned from the brink, and a rebel whose yells made the mainstream sit up and pay attention.

Idol’s most recent record releases, which all include work with Steve Stevens, are latest Billy Idol studio album Kings & Queens Of The Underground featuring production from 2017 and 2018 Grammy Award winning producer Greg Kurstin, a 2016 vinyl-only live album entitled BFI Live and the 2018 remix collection Vital Idol: Revitalized which debuted in the top ten of the Billboard Dance Chart.