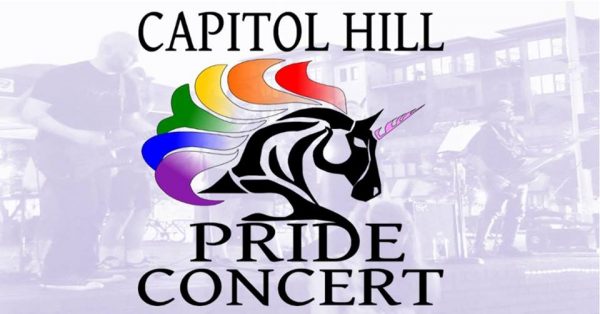 June 1st is the start of Pride month celebrating the 50th Anniversary of Stonewall!

June 1st is the start of Pride month celebrating the 50th Anniversary of Stonewall – when in 1969 the LGBT community stood up against harassing police raids and in what has now became a historic pivotal moment in the fight for LGBT rights.

Capitol Hill Pride Concert is the first major event of the start of June Pride Month.  The event is featured as a grass-roots concert with local talent and performers.

Jay Westwind Wolf Hollingsworth has served on Seattle’s Community Police Commission for six years. Hollingsworth helped develop the Commission, the Office of Inspector General for Public Safety but also helped legislation to strengthen the Office of Police Accountability (OPA). A Civil Engineering Designer Drafter in Seattle, Hollingsworth is a member of the Mohegan Tribe of Connecticut.

On June 1st, “Wizard of Oz” fans and Pride Festival attendees will get a sneak peak at an ambitious new take on the classic tale. “Oz: The Untold Story” is a new musical which draws from L. Frank Baum’s original novels to reveal new depths to the characters that people all over the world have adored for over a century.

The creators have combined story lines pulled straight from Baum’s original texts with all-new material for characters like the Wizard and the Cowardly Lion to bring a rich history and depth to familiar faces.

While the full show includes encounters with the Kalidahs, the inhabitants of China Country, and the deadly Spider, the Seattle Pride sneak peek will focus on the most iconic characters: Dorothy, the Scarecrow, the Tin Man, and the Cowardly Lion, with guest appearances by the Wicked Witch of the West and the Good Witch of the North.

After an absence of 22 years, Tom Orr — the creative mind behind the award-winning musical parody revue Dirty Little Showtunes!, a long-running smash hit at Re-bar in 1997-98 — is back in Seattle with a new solo cabaret and a multitude of new perverted twists on classic showtunes. Winner of 3 Bay Area Theatre Critic Circle awards (Best Musical, Best Lyrics & Best Actor), Orr brings his diabolical wordplay and a uniquely skewed worldview to the forefront with his latest work, a look back at his colorful past and a sneak peek at his bright future, with new material and selections from his prior solo shows:

I Feel A Thong Coming On!, A Crass Act!, The Devil Wears Nada!, Aging Bull! and A Funny Thing Happened On The Way To His Forearm!

7-8pm Lies in Dust – Lola – In 2014 Lies in Dust started spreading their dark interpretations of their favorite 80’s and 90’s songs all across Seattle. Chad Hultgren (guitar/ vocals/programming) and Lola Vast (vocals and founding member) have a diverse list of musical influences such as Patsy Cline, Madonna, Depeche Mode, Alice in Chains, Celldweller, Ministry, The Ramones, Nine Inch Nails, and Pink Floyd (just to name a few).

A Strong Supporter of Equal Rights, Michael Cagle has sung at numerous Gay Pride Events all over the country.
” A Powerful Vocalist who can hit notes so big and long, you could drive a truck on them.” – Ed McMahon
“WOW! You have got some kind of voice on you.” – Country Diva Reba McEntire
“Patti LaBelle Meets Nathan Lane” – FOX TV
Michael has opened for or appeared with: Reba McEntire, Michael McDonald, Kenny Loggins, Eddie Rabbit, The Drifters, Trisha Yearwood, Ricky Skaggs, Paul Revere and the Raiders, Diamond Rio, The Kingsmen, Steven Curtis Chapman, Sheena Easton and many more.

Capitol Hill Pride is an all volunteer based non-profit established in 2017 to support and celebrate the local LGBTQAI community. The Directors founded and directed the Capitol Hill Pride Festival from 2009- 2017 creating the Northwest’s largest Pride street festival event.

The concert format, new for for 2019 is free and open to the public.
Capitol Hill Pride hopes to make 2019 another successful year in advancing equality.

on May 17 | by Michael Strangeways