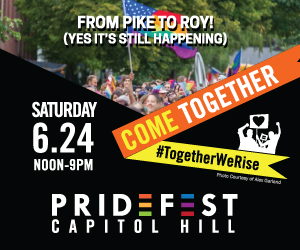 The traditional Capitol Hill Pride/Broadway Block Party event between John and Roy has been at the center of controversy for the last several weeks. The City of Seattle denied its producers the permits needed to stage the annual event after alleged mismanagement and poor communication between the producers and the City. The Broadway Improvement Association is teaming up Seattle PrideFest (who already produce Saturday events at the light rail station and in Cal Anderson Park adjacent to the Broadway event) to take over the event for this year.

This is the link to the PREVIOUS producer’s website about this year’s event. We don’t know how much of this is going to happen for 2017 but we do know there will be community booths, entertainment stages including the one at Julia’s/LeFaux.

The hours are supposedly 10am to 10pm. That may change with the new producing team…PrideFest’s events in Cal Anderson appear to be starting at Noon so there might be adjustments made in the schedule.