Gay City Arts: DOE: An Exploration to the End 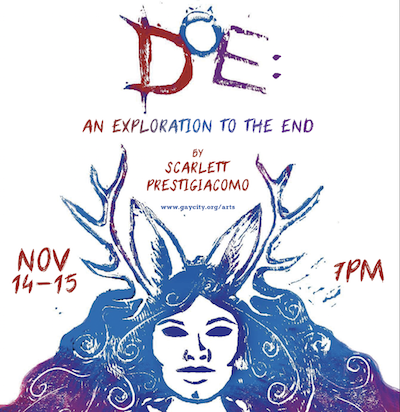 DOE: An Exploration to the End

DOE: An exploration of The End is an apocalyptic fairy-tale. It will be performed as a one-woman show by Scarlett Prestigiacomo. Using original poetry and music, she will weave together a surreal, mythic world around a cast of fantastical characters.

The story follows the life of Doe, a human-like being with deer-like traits, as she discovers, experiences, and embodies her identity as a trans girl. After committing an act of violence aimed at stripping Doe of her femininity, her father is banished to a forest of chaotic magic and she is accepted by her mother and family as her true gender. As she grows into an adult, her fathers spirit returns from the forest in varying animal forms and makes trouble for her and the world.

Each aspect of the show, from the performance to the set to the costumes, will be part of a ritual. The audience is invited to become part of this ritual; to invite their ancestors and family, to bring their Deities with them, to be with the Earth as she moves into a new cycle of being. We will honor the primordial truths which brought this world forth, and to which it shall all be returned.

Copies of the book DOE by Scarlett Prestigiacomo will be available at the show for $20, with a free CD.

BIOGRAPHY
Scarlett Prestigiacomo is an amorphous cloud of psychic energy from the constellation Cassiopeia temporarily inhabiting a human form. In this life, she moves through the world as a Black Trans Woman from a multi-racial background, and so her art is heavily informed by these sacred ways of being. Her work primarily uses nature to understand the emotional and spiritual self. She has performed as a spoken word poet throughout the PNW, and as a musician, she plays solo under the name Doe Fields and with her band House of Bog as The Bog Witch. You can follow Scarlett on Instagram @doe_fields. You can find her music on soundcloud.com/doefields and doefields.bandcamp.com