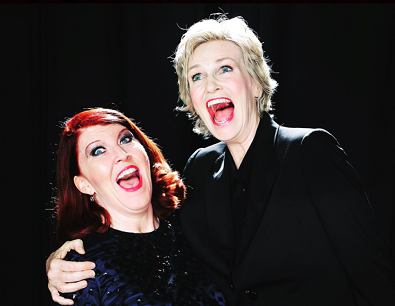 Seating and dinner service begins at 6pm {All Ages}

“An uproarious display of song and comedy.” – Get Out! Magazine

Emmy-award winning actor Jane Lynch (Glee) and Kate Flannery (The Office) put their one-of-a-kind spin on songs from Broadway to The Barry Sisters to the Swingin’ Sixties. Like the Rat Pack with a couple of broads.

Jane Lynch was raised near Chicago and cut her theatrical teeth at The Second City and Steppenwolf Theatre. Lynch is the two-time Emmy winning host of Hollywood Game Night and an Emmy and Golden Globe winner for her portrayal of Sue Sylvester on Glee. She currently appears in The Good Fight on CBS and on Amazon’s The Marvelous Mrs. Maisel. Additional television credits include portraying Janet Reno in Manifesto, Criminal Minds, Portlandia, Angel From Hell, Party Down, Lovespring International, Two and a Half Men, and The L Word. Lynch’s film credits include Wreck It Ralph I and II, The Three Stooges, The 40-Year-Old Virgin, Talladega Nights, Role Models, Julie & Julia, A Mighty Wind, Best In Show, and For Your Consideration.

She made her Broadway debut in the 2013 production of Annie, and soon thereafter embarked on her own live concert tour, See Jane Sing, with Kate Flannery and Tim Davis. Their Billboard Top 10 holiday album, A Swingin’ Little Christmas, is available from iTunes, Amazon, and other outlets.

Kate Flannery is best known for her 9 seasons as Meredith the drunk on NBC’s The Office.  She’s a regular on Hulu’s All Night and Cartoon Network’s OK KO. Her off-Broadway shows include Nora & Delia Ephron’s Love, Loss and What I Wore at the Westside, Neely O’Hara in Theater A-Go-Go’s Valley of the Dolls at the Circle in the Square, and Alice in The Real Live Brady Bunch at the Village Gate. Recent TV credits also include New Girl, American Housewife, Another Period, and Brooklyn Nine Nine. Kate is currently Jane Lynch’s sidekick in her anti-cabaret act, having played over 30 cities. Kate is featured on Jane’s hit Christmas album A Swingin’ Little Christmas. Her original cult comedy lounge act, The Lampshades, also plays Hollywood regularly.