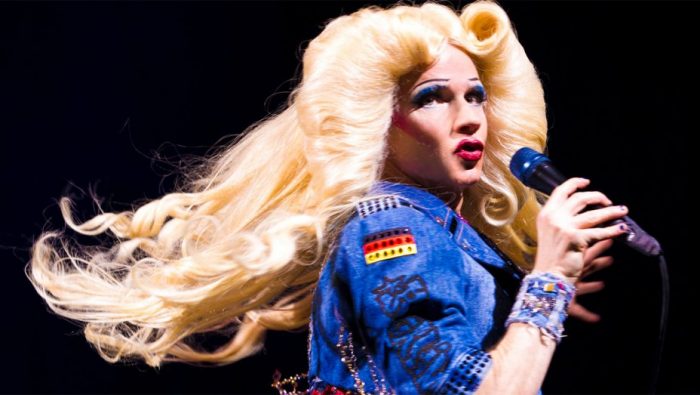 Actor/writer/director John Cameron Mitchell (Shortbus) tears up the screen as the titular character in his feature debut, returning to the big screen in a new 4k restoration.

John Cameron Mitchell will introduce the movie and participate in a post-film Q&A at the 6:00 PM show on Saturday, August 17.

Based on his own original musical (conceived for the stage in collaboration with composer Stephen Trask), Hedwig and the Angry Inch focuses on Hansel (Mitchell), an East German kid who falls for an American soldier and has a bungled sex reassignment operation in an attempt to become legally married to him. Having gone from Hansel to Hedwig, and left with a one-inch remnant of her birth gender, it’s not long before the love affair is over and Hedwig now in America alone and channeling her rage as the frontwoman for her critically reviled and woefully obscure band Hedwig and the Angry Inch. Using Greek myth to explain to herself and her audience the genderqueer reality of her being, Hedwig is ultimately is both a phenom and a cipher, defined only by the art and life she lives.

“Hedwig and the Angry Inch is a powerful story about identity and creation and pain and love. It’s a miracle, I love it, and you will too.”—Andrew Todd, Birth. Movies. Death.