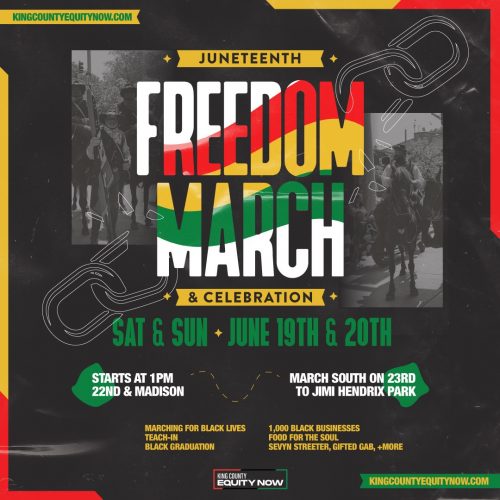 Juneteenth is a celebration of the Black freedom struggle. On June 19, 1865—two and a half years after the Emancipation Proclamation was signed—a Texas Major General delivered news that the Civil War had ended and enslaved Africans were now “free.” Over 150 years later, as a result of individual and collective policy-decisions, Black community remain in a social sub-caste, occupying the bottom rung of nearly every social metric. For KCEN and ACLT, Juneteenth represents a call-to-action for Black equity and a demand to implement self-determined, pro-Black policies that close the equity gap on a timeline that doesn’t last into the next century.

Last year, we hosted the historic Juneteenth Celebration with over 35,000 supporters in attendance. Uplifting local history, we began the march on 23rd and Madison to honor the late Decharlene Williams and her Central Area activism where, nearly 40 years ago, she established the Central Area Chamber of Commerce and brought Juneteenth to Seattle. Watch the video below from our Freedom March last year.

Building on that strong legacy, this year’s will be larger, broader and even more impactful! We are hosting a New Orleans style, Black freedom parade starting at 1pm on 22rd and Madison. Black 2021 graduates, an all-Black drumline, and a Black elder caravan will lead the parade through the Central District – Seattle’s historically Black neighborhood. Community leaders will point out historic markers and pay homage to the many Black entrepreneurs and leaders, including William Grose, who helped build the Black enclave. The march will culminate at Jimi Hendrix Park for a celebration and will include performances by Sevyn Streeter and more.