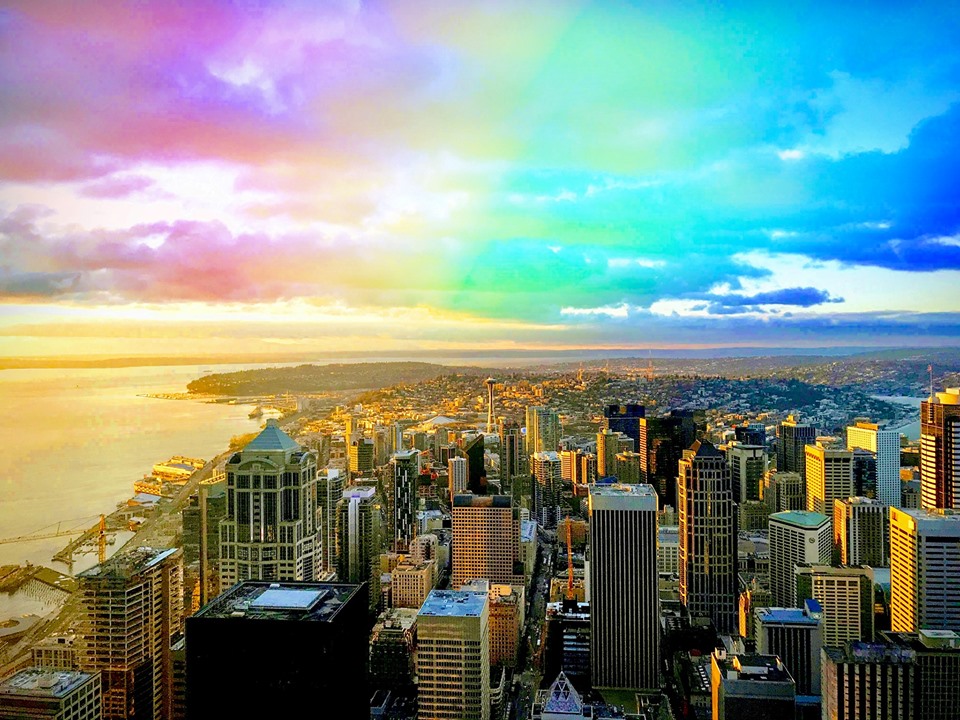 Admission is free exclusively on June 6th from 6pm – 9pm

Join us at Sky View Observatory for an evening of Pride events including:

Look How Far We’ve Come: A Queer Art Show 902 Feet in the Air

It was in 2450 BCE that the first example of a queer relationship was depicted in art. Paintings show two men, both Egyptian royal servants, embracing. They are considered to be one of the first recorded same-gender couples in history. At the turn of the 20th century, a pair of lesbian photographers documented secretly their relationship in a studio space that doubled as an activist center for women’s suffrage. And in 1969, in the wake of Judy Garland’s death, an uprising against the police later known as the Stonewall Riots ushered in the birth of modern art and activism for LGBTQ people.

At an unprecedented exhibition of visual art at the highest public viewpoint of the Columbia Center, Seattle’s tallest skyscraper, curator Timothy Rysdyke is bringing together a vital cross-section of artists whose work reflects the sweep of queer history and each artist’s individual place in it. “I’m incredibly excited to showcase some of the most interesting artists in the city,” Rysdyke says. “I’m also excited about this elevated venue for art. The view is unbelievable. Have you ever been up there?”

Anthony White, who makes eye-popping paintings from the frontlines of millennial life, made his solo exhibition debut at The Factory on Capitol Hill last year and within months was being represented by Greg Kucera Gallery. Billy Bacarella makes sculptures that recall Greek conceptions of love and beauty. Casey Curran is known for intricate, often shining, installations. Clyde Petersen makes comics, videos, music, performances, and sculptures. Coco Spadoni creates ceramic pieces reminiscent of clouds–perfect for Skyview Observatory. The same could be said for Markel Uriu’s marvelous clusters of paper birds.

Rounding out the show; Mary Anne Carter is a screen printer who makes posters, t-shirts, and hilarious objects. Sequoia Day O’Connell’s works in neon-colored pencil and paint reflecting their interest in private human moments. Ralph Houser is a collage chemist. Steven Miller is a phenomenal portraitist and whose photographs have appeared on the cover of The Stranger.

A stellar soundtrack for the event will be provided by DJ B More Free and a live window mural will be painted through out the night by Rainbow Tay.