Mama Tits in “Sweet Like Candy: A Jazz & Blues Tribute” 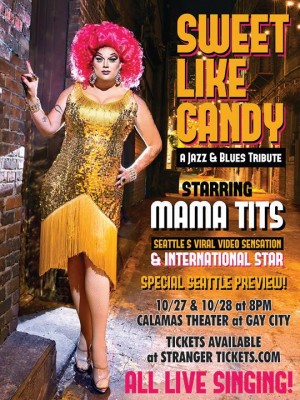 Seattle’s Skyscraper Hostess Mama Tits, known for her activism and her immense talent is taking to the stage in her very own One Diva show; “Sweet Like Candy” a jazz & blues tribute — paying homage to strong independent women who have turned their nose at society’s rules on what is beautiful and what you’re allowed say. The show takes you through some classic jazz & blues standards as well as some under known gems, weaving together a story of self love, personal empowerment and sexuality as told through music and comedy. Taking notes from such great female musicians as Nina Simone, Ella Fitzgerald, Dinah Washington and many more, Mama Tits is buttery smooth with just the right mount of sass.

This show is headed off to sunny Puerto Vallarta Mexico for the 2016- 2017 winter season! But before it goes Mama wanted the opportunity to share this experience with her hometown Seattle audiences in a limited “Sneak Peek” engagement at Gay City’s Calamus Auditorium on October 27th & 28th at 8pm! This is an ALL AGES show. Come see Mama Tits as you’ve never seen her before.

“A Voice and Personality as big as her wigs!” – Lady Bunny

“Shes a Monster, A Big Glamerous Monstor that I just ADORE!” – Jackie Beat

on September 17 | by Michael Strangeways