NFFTY: Come As You Are (Queer Film Screening) 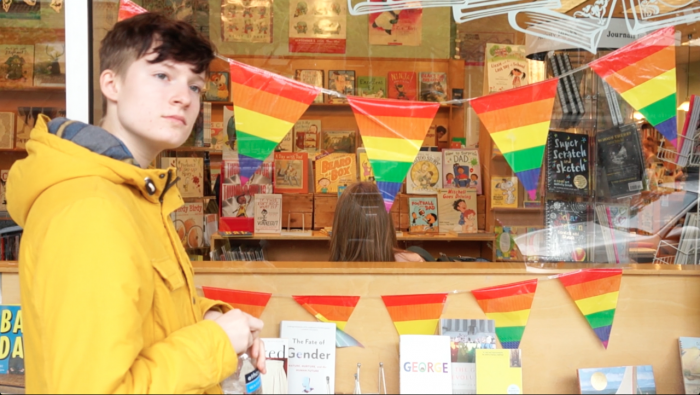 “Transformative” is a short film by Krystelle Kurz – 15, Claire Elliott – 17, Sorcha Marron – 15, Maureen Brown – 16, (Washington) screening at NFFTY’s “Come As You Are” screening on Saturday, April 29 at SIFF’s Uptown Cinema.

NFFTY, the National Film Festival for Talented Youth is an amazing Seattle based film festival that stages a film festival every year showcasing the work of film makers 24 and under. NFFTY 2017 kicks off tonight at Cinerama (it’s sold out!!!) and continues through Sunday, April 30th at SIFF’s Uptown Cinema.

For LGBTQ audiences keen to see work by young queer film makers, COME AS YOU ARE is the screening featuring new short films by LGBTQ artists. It’s happening Saturday, April 29, 2017 at 3:30 pm. Grab tickets HERE…do be advised that even though these are films by younger film makers, not all films may be appropriate for VERY young audiences…some feature graphic content!

NFFTY presents a selection of the finest LGBTQ films by directors 24-and-under. We hope you will help us get the word out that these screenings will help inspire the next generation of LGBTQ filmmakers to share their stories, and help youth currently grappling with issues of identity. NFFTY’s LGBTQ Lineup is stellar this year so wanted to reach out and give you some info to pass along to anyone who might be interested! It’s on Saturday, April 29 at 3:30 PM Uptown Cinema 2!

With a camera in hand and a clear message in mind, these brave filmmakers have approached issues of individuality, self-expression, and acceptance with the full power of cinema behind them. This inspiring screening explores the struggles and triumphs that we all encounter when establishing our own identities in today’s world. Come with an open mind, leave with a full heart!

A transgender woman begins to lose track of reality as she navigates the space between what is natural and what is artificial.

Where The Trees Bend

A struggling actor cannot satisfy his authoritative director. A retired teacher is starting to question his marriage. Both seek out into the forest.

Over the course of four months, I collected video portraits of 18 different women to celebrate female identities.

A harmed figure seeks wholeness by traveling through disjointed layers of self.

As reality collapses around him, a mixed-race teen must confront his true identity to come out to his parents before it’s too late.

In the midst of recent legislation regarding transgender people’s rights, their voices have been conspicuously absent in the media. All teenagers worry about high school, but not all teenagers have to worry about using the bathroom.

Aaron James, a part-time drag queen and full time student, strives to find his true identity in the most conservative and reddest of states, Oklahoma.

Emma is stuck in the weird lull between high school and college: saddened at the death of what she knows and loves and pessimistic about the future. In the midst of this lull, she discovers her best friend Autumn isn’t leaving in three months – she’s leaving in the morning.

on April 27 | by Michael Strangeways