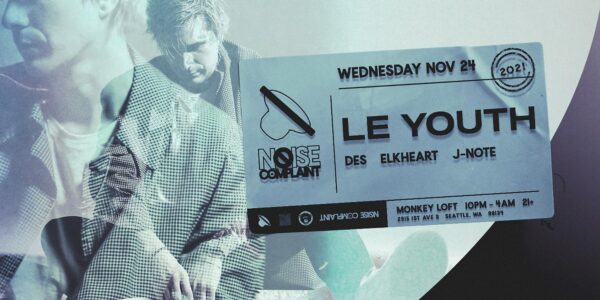 Noise Complaint and the Monkey Loft are proud to present, a night of thoughtfully curated music featuring:

www.leyouth.com
www.facebook.com/LeYouth
www.instagram.com/leyouth
www.soundcloud.com/leyouth
www.twitter.com/leyouth
Le Youth has been a constant force in dance music since his crossover hits ‘C O O L’ and ‘Dance With Me’ stormed the UK charts in 2013. Fast forward 8 years and numerous records, remixes and a quarter of a billion streams later, Le Youth continues to elevate his artistry starting with his recent offering “Aquiver EP” on Lane 8’s This Never Happened imprint.
Heavily inspired by the deep melodic techno and progressive sounds that came out of Europe from the likes of Sasha, John Digweed, Eric Prydz and more recently Lane 8, Yotto, and Ben Bohmer, Le Youth’s decision to make new music made almost exclusively for the dance floor, was a deliberate one.
Wes James, aka Le Youth, began collecting iconic vintage studio equipment and synthesizers and it is his exploration of these pieces, by both experimenting with them himself and learning of their usage throughout dance music history, led Wes down a new musical avenue rediscovering some of the true analog essence of dance music.
It’s been an exciting few years for Le Youth and his musical output on This Never Happened, Island Records and his new label and event brand PRGRSSN. Catch him on the road supporting Lane 8 on tour, as well as his own headline tours in residencies at top clubs all over North America and beyond.
LOCAL SUPPORT FROM:

Proof of vaccine will be required to attend this event

EVERYONE DESERVES TO FEEL SAFE AT SHOWS

+ ASK FOR CONSENT before getting up in someone’s space.
+ VENUE STAFF are here to help.
+ ALCOHOL & OTHER DRUGS do not equal consent. Enjoy the music. Revist the connection later.
+ RESPECT people’s boundaries. Be chill if they say no.
+ CHECK IN with people who need it.
+ REMIND FRIENDS to be more self-aware if they are making people feel uncomfortable.
—

Gone is the party where the music and the people at the party mattered more than making money. As Electronic Dance Music has exploded in popularity over the last several years, so have crowds and ticket prices along with it. In the beginning, events were held in underground, often intimate venues. It was about the music, and it was about each other.
Noise Complaint is taking it back to its roots, bringing the people quality, dance floor focused house and techno all while pushing that party-don’t-stop vibe that everyone loves. We’re bringing in huge talent – DJs and producers that are well known and respected but that we also personally vibe with. We’re doing this at a small price, and in an intimate space. It’s about the music for us, it’s about the party and the vibe and the memories and friends you will make. Every Noise Complaint should be the best party you’ve been to since well, the last Noise Complaint.
We’re more than just a party, we’re a movement. Join us 2nd Fridays at Kremwerk and become part of the family.
+ Google Calendar+ iCal Export

on November 24 | by Michael Strangeways