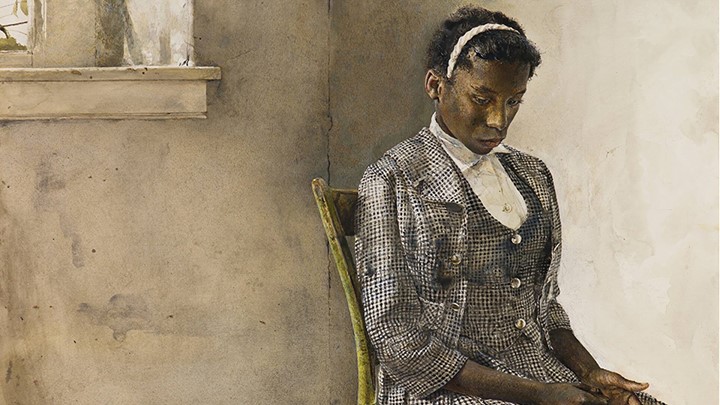 Tickets are now on sale for “Andrew Wyeth: In Retrospect” at Seattle Art Museum. The exhibition will be on view October 19, 2017—January 15, 2018. visitsam.org/wyeth

Enter Andrew Wyeth’s reality. On the 100th anniversary of the artist’s birth, “Andrew Wyeth: In Retrospect” examines the American master’s 75-year career and offers unexpected perspectives on his art and legacy. Organized in partnership with the Brandywine River Museum, this major exhibition presents over 100 of the artist’s paintings and drawings. It looks back on a century in America when Wyeth confounded critics and deviated from the American art mainstream, but continued to figure prominently in much of the country’s artistic discourse.

“Andrew Wyeth: In Retrospect” follows the evolution of one of America’s most famous painters by bringing together well-known and rarely seen works. From depictions of his life in Chadds Ford, Pennsylvania, to the coastal villages of Maine, Wyeth created timeless images of places, people, and things—layered with acute observation and a boundless imagination—all imbued with the artist’s mysterious temperament. Often out of synch with the time, Wyeth’s art challenged the norms of realism and abstraction.

The exhibition begins in the late 1930s with Wyeth’s breakthrough works of brilliantly colored, boldly gestural, transparent watercolors of the Maine coast. These were soon set aside for the somber-toned and tightly rendered tempera paintings often associated with the artist. They include some of the artist’s most famous paintings, such as portraits of Christina Olson of Maine and Karl Kuerner, his neighbor in Chadds Ford.

Also on view are the artist’s little known portraits of African Americans, a major focus of Wyeth’s work in the 1950s and ‘60s, followed by work from the 1970s and ‘80s, including the eroticism of the once-secret Helga paintings, and other deeply psychological but lesser known paintings from the Helga years. Finally, the exhibition reflects on images of his later life as he closed the book on his earlier subjects and looked for new ones. It brings to Seattle Wyeth’s last painting, Goodbye, which has not been seen since it was briefly shown to those who attended the artist’s memorial service in 2009.

Andrew Wyeth investigated the possibilities of the portrait, the figure, and the places we inhabit—shunning narrative and rising above cliché—to convey the very emotions that make us human.

The exhibition will be accompanied by a fully-illustrated catalogue co-published by Yale University Press.

“Andrew Wyeth: In Retrospect” is co-organized by the Brandywine River Museum of Art and Seattle Art Museum.

Special exhibitions at SAM are made possible by donors to SAM Fund for Special Exhibitions.

on September 15 | by Michael Strangeways