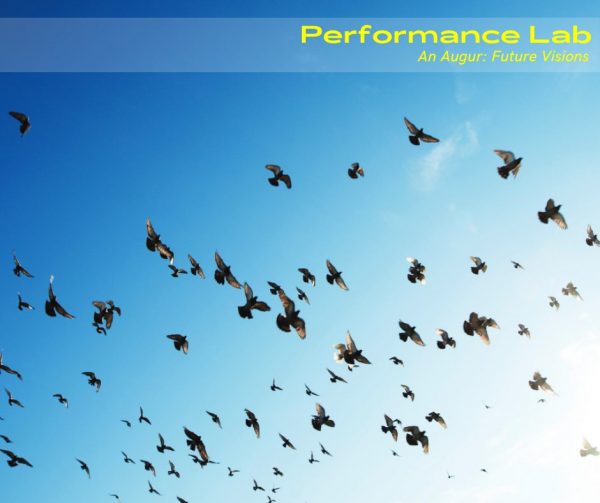 Happy New Year! Join us ushering in 2020 at our upcoming Performance Lab – An Augur: Future Visions, where you’ll be invited to join featured artists in divining auspicious paths forward through our turbulent present.

An Augur: Future Visions features new work experiments, rituals, and divination practices that will invite the audience to read the patterns of the present to foretell the future. Augury was a pre-Roman empire practice of interpreting the flight movements of birds to divine omens, messages from the gods of what was to come. This event’s selected artists will share their work developed in conversation with these themes; reflecting on the nature of time, engaging personal history to find healing paths forward, and discerning present trends to imagine possible futures. Since this Future Visions Performance Lab is concerned with perspective shifts that stir curiosity and new ways of noticing, the evening will also find these artists exploring non-traditional performance spaces and relationships to audience all over the second floor of the building. Tarot Reading by artist Leon Finley (by donation) and an invocation and divination practice by ritualist Timothy White Eagle and friends.

Shelby Handler
“Trypomancy: Backwards and Forwards” is an experiment in transmuting holes into openings to air intergenerational grief and invite future kinships to shine through.
Shelby Handler is a writer, performer and educator living on Duwamish territory/Seattle. A 2019 Hugo House fellow, their work has been supported by Seattle Office of Arts & Culture, Gay City Arts, Asylum Arts and Yiddish Book Center. Their poems appear in Gigantic Sequins, glitterMOB, the anthology “We Will Be Shelter: Poems for Survival”, among others. Shelby’s work has been on national stages, inside synagogues, libraries, public buses and parking lots. Find them at shelbyhandler.com.

Jéhan Òsanyìn
semillas
A tri-lingual piece exploring how poetry, prose, and ritual can be used to tell the stories from my memories.
Jéhan Òsanyìn is a queer multilingual Artist and Activist. Recently, Jéhan was an Artist-in-Residence in Blanca, Murcia for three months with AADK Spain. Their research includes using theatre to explore the stories we tell with our bodies with and without our consent. Jéhan founded the arts organization Earthseed, which is located in Beacon Hill. This Spring Jéhan is directing the World Premiere of Sara Porkalob’s Alex and Alix at ArtsWest.

Julianne Chapple/Future Leisure
Dazzle
We are constantly being observed; the sousveillance of social media, the surveillance of the state and increasingly private corporations. Is there an escape from ever present digital observation? And must we become more machine-like to achieve it?
Julianne Chapple’s performance, video and installation work has been presented extensively in Canada, as well as Italy, Ireland, Germany, the USA and the UK. Most recently, Chapple was awarded the 2017 Iris Garland Emerging Choreographer Award and was artist in residence at Echo Echo Studios in Northern Ireland. Julie is a member of media art collective the Work Group is artistic director of newly formed dance company Future Leisure, co-producer of the Shooting Gallery Performance Series and sits on the board of directors for CADA-West.

Sara Brickman
A Ritual for Suturing Ghosts
Trauma rips a hole in your life. Trauma births new ghosts. How do we speak with them? With language, needle, and thread, Ritual for Suturing Ghosts will begin to repair the borders between worlds.
Sara Brickman is a queer Jewish author, performer, and community organizer from Ann Arbor, MI, invested in liberatory futures and reckoning with ghosts. Her work investigates trauma, diaspora, gender and memory. The winner of the Split This Rock Poetry Prize, they have received grants and fellowships from Lambda Literary, The Yiddish Book Center, 4Culture, Artist Trust, and more. Sara holds an MFA in poetry from the University of Virginia, and lives in the unceded Duwamish territory of Seattle, where they work in a library and hang out with a cat named Latke.

Fox Whitney
Transmitter
Using mirror scrying, cartomancy, and bibliomancy, I will offer witnesses messages from the queer future.
Fox Whitney is the choreographer/architect of Gender Tender, an interdisciplinary performance project that centers his queer and transgender point of view. His performance work has been commissioned and produced by On the Boards, Velocity, and Seattle Festival of Dance Improvisation; the Seattle International Dance Festival; Yellow Fish Epic Durational Performance Festival and was selected for the inaugural season of Seattle’s Gay City Arts. His short dance films have screened at CounterPulse in San Francisco, at Seattle’s Twist Film Festival, Translations: Seattle’s Transgender Film Festival and at Next Dance Cinema presented by Velocity and Northwest Film Forum.