An event every month that begins at 9:00pm on day Third of the month, repeating until March 31, 2020 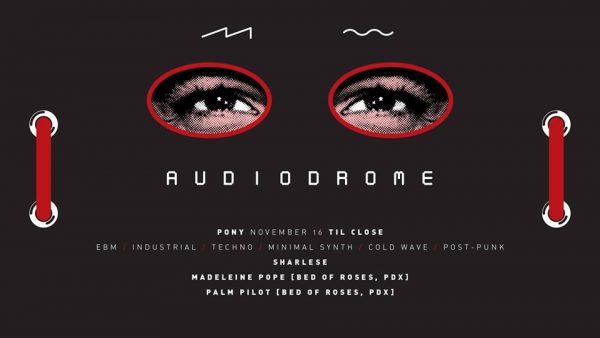 AUDIODROME | Every third Saturday of the month at Pony!

January’s guest is very special and near and dear to our hearts! Patricia Wolf of [Variform | Musique Plastique, PDX] ♥

Patricia Wolf is an electronic musician, sound designer, and gallery curator based in Portland, Oregon. After years of working in the synth pop duo Soft Metals, Wolf became interested in exploring non-linear songwriting and new forms of synthesis. Alongside working with Novation, Wolf co-founded the gallery Variform which focuses on sound design and modern composition. Patricia Wolf is a recipient of the Precipice Fund, a grant funded by the Andy Warhol Foundation for the Visual Arts, to explore synthesis in the contemporary art world.

More about AUDIODROME
AUDIODROME has history at the stable! Years ago, this is where it where it all began, slowly morphing into to a night at Kremwerk called FALSE PROPHET.

We’re excited that this special night will feature resident DJ Sharlese with a rotating flow of guests that will bring you their superb taste in post punk, industrial, minimal synth, cold wave, EBM and techno hits!

on January 17 | by Michael Strangeways