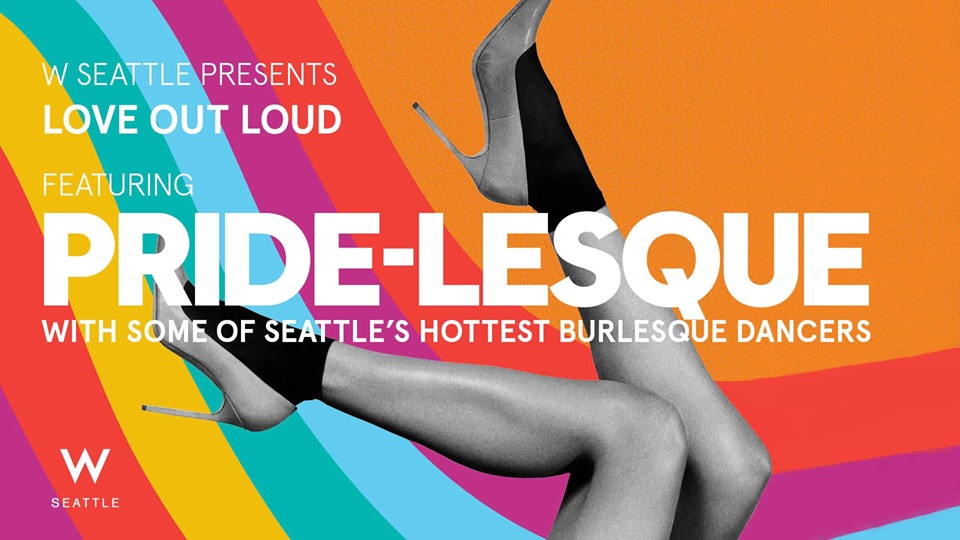 Kick off the night with feathers and fierceness as W Seattle welcomes five of Seattle’s hottest burlesque dancers. These amazing entertainers will steal the scene with their shimmy and shake while you prefunk the parties with your besties. We are ecstatic to welcome Waxie Moon, Jamie Von Stratton, Moscato Extatique, Ruby Mimosa and Faggedy Randy to the W Stage from 8PM-10PM for our LOVE OUT LOUD Weekend event – Pride-lesque.

WAXIE MOON
Miss(ter)Waxie Moon is a gender-blending queer lady “boylesque” performance-art solo stripping sensation. He has headlined burlesque festivals in Vienna Austria, Vancouver, Edmonton and Ottawa, Canada, Helsinki Finland, San Antonio Texas, New York, and Seattle. Performance highlights include competing in the “best boylesque” category at The Burlesque Hall of Fame in Las Vegas (2013, 2015) being featured in Land of the Sweets, A Burlesque Nutcracker (Seattle, WA.), performing in and choreographing House of Thee Unholy #2, 3, 4 and 5 (Seattle, WA.) and being presented by numerous performance organizations including, On The Boards (Northwest New Works Festival and 12 Minutes Max), Bumbershoot (Seattle) and The Seattle Erotic Arts Festival (SEAF). He is featured in the documentary films Waxie Moon (directed by Wes Hurley, I Ate My Eye Films) and A Wink and a Smile (directed by Deirdre Timmons, Golden Echo Films). In 2009 he was voted “Best Burlesque Performer” by The Seattle Weekly (Readers Poll). He is on faculty at Miss Indigo Blue’s Academy of Burlesque and has taught and lectured about burlesque worldwide. He was nominated for a 2010 Gregory Award (Excellence in Theater, Washington State) and is featured in the web series Capitol Hill.

FAGGEDY RANDY
Faggedy Randy has been a dynamic part of the Seattle boylesque and dance scenes for over a decade. Among his contributions are his roles in Homo for the Holidays, Bendelacreme’s Gaylord Manor, and Scott Shoemaker’s War On Christmas. Catch Randy monthly at Burlesque Behind The Pink Door and other venues where feathers, rhinestones, and pasties can be found.

MOSCATO EXTATIQUE
The Them Fatale of Burlesque, Moscato Extatique, is a classically trained dancer and award winning choreographer based out of Seattle, WA where they earned a BFA in Dance from Cornish College of the Arts. This tempting tart is one fourth of world renowned burlesque sensations Mod Carousel, a dancer for House of Verlaine, and has graced the stage in productions by BenDeLaCreme and Verlaine & McCann Present. Moscato is the newest Teacher at Miss Indigo Blue’s Academy of Burlesque. They continue to make ripples in the burlesque community by sharing their gender-queer, sexually alluring style with festivals and productions across the US and Canada.

RUBY MIMOSA
Ruby is born and raised in Hawaii. She was brought up on Hula, Ballet, and Gymnastics this Island Flower has been dancing since she was three. Ruby moved to Seattle in 2006, where she quickly got recruited as seventh member to the ‘International Supertroope’, The Atomic Bombshells.
Ruby has been one of the primary instructors at Miss Indigo Blue’s Academy of Burlesque since 2007; teaching Burlesque Bump & Grind, Tassel Twirling, and The Art of the Tease, and most recently Burlesque 101 to women and men of all shapes and sizes. She has taught her classes at BurlyCon, up and down the West Coast, Vancouver B.C., and in London and Paris.
Ruby’s unique mix of athleticism, dance, theatrics, and bubbly charm makes her a Seattle treasure and beloved all over the world. She has been a highlighted performer in France, England, Portugal, Canada, China, and Australia.
Ruby also works with cowboy band Brent Amaker & the Rodeo has been shimmying her way along countless rock and roll stages throughout Seattle, the West Coast, and festivals including SXSW. She has worked with Grammy award winning artists Macklemore & Ryan Lewis, as well as a host of Burlesque’s crème de la crème.

J. VON STRATTON
J. Von Stratton began her stage career in the Northwest with the burlesque troupe The Atomic Bombshells. Her unique blend of theatrics, dance, camp, and kitsch have made her a Seattle favorite, as well as taken her across the globe. She has been a highlighted performer in Switzerland, Finland, Denmark, Germany, Canada, Portugal, China, and Australia.
J. Von Stratton is the 2015-2016 Queen of the Roses (the winner of the Oregon Burlesque festival).
J. Von Stratton has worked with Macklemore & Ryan Lewis, Dita Von Teese (with the Atomic Bombshells), Margaret Cho, and Sir Mix-A-Lot, as well as a bevy of Burlesque’s finest.