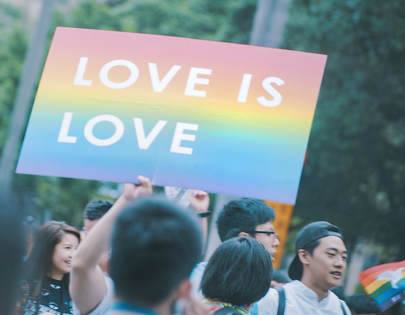 ZERO ONE
Nick Neon / United States / 2018 / 24 mins
Jimmy Park is the last place he wants to be, back home to celebrate the New Year in NYC. He’s visiting for the first time in years and fears he has nothing to show for his time living in Seoul. Over a family dinner, old tensions come to a head when he confronts his homophobic sister. On New Year’s Day, Jimmy will learn that the first step to finding your path is admitting you’re lost.

EVERYTHING’S GREAT!
Linnea Ritland / Canada / 2017 / 22 mins
An awkward 20-something lesbian bounces between a not-relationship relationship and her alcoholic-dad-soaked home life, seeking stability in others — but eventually finding it in herself.

TAIWAN! LET’S GET MARRIED!
Larry Tung / Taiwan / 2018 / 18 mins
In May 2017, Taiwan’s Constitutional Court ruled in favor of legalizing same-sex marriage, setting a two-year deadline for the legislature to make it a reality. But that was only the first step on the long quest to make Taiwan the first country in Asia to legalize same-sex marriage.

on February 13 | by Michael Strangeways