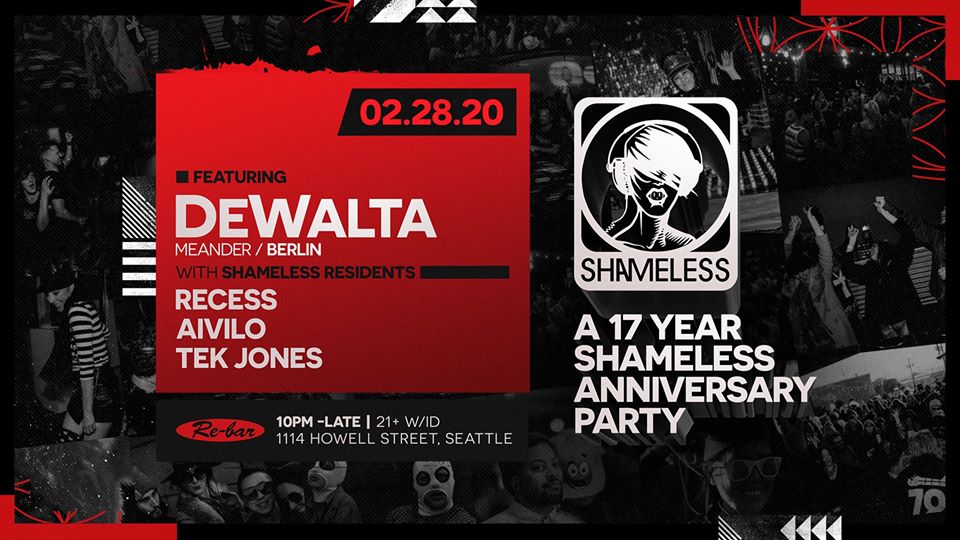 Come join us and celebrate 17 years of Shameless! We’ll be serving up some birthday cake along with the Seattle debut of Berlin’s DeWalta! One room. Going laaaate. Let’s dance!

DeWalta Bio:
There’s a joyful exuberance that comes from improvised music, as pure unfiltered creation meets with talent and skill to create accidents and moments freed from the shackles of structure and predictability. That David Koch’s early forays into music were driven by improvisation speaks volumes for the excitement and energy that emanates from him as a producer today.

Any artist will happily regale an audience about formative years spent listening to the family record collection, and some may have even started out with instruments, but in David’s case his creative arc began when he first picked up a French horn aged 6. It’s telling that he decided to leave behind the prescribed path of a classical musician and preferred to improvise, even before he picked up the saxophone six years later.

Mixing a self-taught process with some professional guidance, David absorbed the heritage of his grandfather’s bebop and jazz records and progressed to joining the Musikhachschule Hanns Eisler conservatory in Berlin. By the time he had finished his studies and was drawn into the seductive world of electronic music production, he had already been defining a musical direction for the vast majority of his life.

David’s introduction to the world at large, at least within the confines of underground house and techno, came once he adopted the DeWalta alias. At the same time he launched the Meander label with Fabian Geimer and Jens Körmer, providing an ideal platform for his unique slant on production as well as that of a handful of like-minded artists.

Whether producing for Meander or Vakant, Kalk Pets or Cynosure, there’s a unifying quality to David’s music. As with all good artists it’s somewhat indefinable, but it exists somewhere between the rattle and tumble of organic percussion, the vibrant lashings of horns and the warm, rounded electronics. There’s no escaping the strong and determined groove that propels these tracks, but equally the playful energy and maverick charm belie David’s accomplished musical career.

Of course the past is influential, but of equal importance is the people you meet along the way and how you let them shape your destiny. In David’s case, as a long time Berlin resident it was inevitable that he would cross paths with an artist like Mike Shannon. After they dived into the studio and producing two EPs together, it was a natural progression for David to entrust his debut album to the plucky Canadian, and so “Wander” was brought to the world via Mike’s Haunt imprint.

It’s not easy to portray the complexities of an artist in the confines of a release, but on “Wander” David has achieved a rich and detailed account of who he is as a musician. Each track deals in a head-spinning amount of detail in between the more prominent beats and melodies, from strange analogue FX to fast and loose improvisations. More than anything though, it taps into that aforementioned exuberance which comes from an artist who has grown up making things up his own way. DeWalta is proof, if ever it was needed, that it’s more fun to not compute.
https://soundcloud.com/dewalta
https://www.instagram.com/dewalta/
https://www.facebook.com/dewaltadavid
http://www.residentadvisor.net/dj/dewalta
https://www.discogs.com/artist/805655-DeWalta