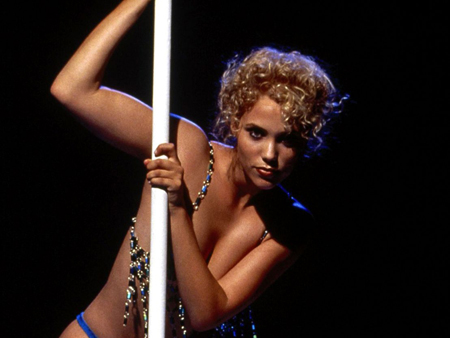 Paul Verhoeven’s Notorious Stripper Drama
Hosted and with Live Annotation by David Schmader
“What Schmader does is crystallize the consistency of the movie’s badness, revealing even seemingly innocuous moments to be part of an intricate pattern of badness that affects every aspect of the film. It’s marvelous.” —Hollywood Reporter

Upon its 1995 release, Paul Verhoeven’s glitzy stripper drama SHOWGIRLS earned some of the most extravagantly awful reviews in cinema history. “A film of thunderous oafishness,” wrote Kenneth Turan of the Los Angeles Times, with critics around the globe damning Showgirls as a failure doomed to die in infamy.

Only it didn’t. Since its original release, SHOWGIRLS has grown into a full-fledged cult phenomenon, thanks in part to the cinematic missionary work undertaken by David Schmader, the critically acclaimed writer and performer who hosted his first annotated screenings of the film at Seattle’s Northwest Film Forum in 1999. Part art-appreciation lecture, part sit-down comedy routine, all against the backdrop of Verhoeven’s peerlessly offensive, flesh-drenched disaster, SHOWGIRLS with David Schmader was an instant hit, packing theaters in Seattle and touring to film festivals across the country, with Schmader reintroducing Verhoeven’s hideous folly to a generation of filmgoers as the most inadvertent, surreally hilarious comedy in film history.

In 2003, Schmader’s theory was confirmed by MGM Studios, which invited Schmader to record his commentary for a special-edition, 10th anniversary Showgirls DVD box set, which was released to acclaim in 2003. (But nothing can top the live show, featuring an audience of aghast others and an annotation-providing host who skips the rape scene.)