SIFF 2019: We Are The Radical Monarchs 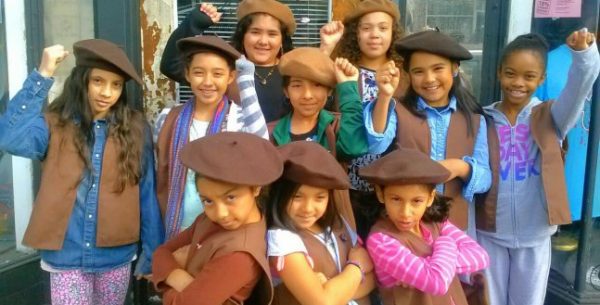 Follow the founding and growth of the Radical Monarchs, an Oakland-based alternative to the Girl Scouts for young women of color (ages 8-13) at the front lines of social justice and allyship.

“Shows that the future is indeed female.”—Deadline Hollywood

Don your brown beret, join the Radical Monarchs for a march on behalf of a social-justice issue, and work to earn your Radical Justice merit badge. Feeling that other leadership-development organizations weren’t quite right for their young daughters of color, Anayvette Martinez and Marilyn Hollinquest built their own organization in Oakland. Bridging the first years of the Radical Monarchs, this empowering documentary celebrates the critical world activism being instilled in the young Monarchs and the overwhelming duties and challenges facing the parents who are working to bring such a valuable concept to a place of sustainability without breaking themselves. Director Linda Goldstein Knowlton bisects her film with the 2016 election, watching the young women build strength in knowledge during the Obama years only to have their activism put to the test, taking to the streets and architecting their power through their passionate sense of themselves within the larger struggle. At Alexandria Ocasio-Cortez’s SXSW Panel, two young Radical Monarchs asked her, “What advice do you have for girls of color who want to break into politics?” “Stop trying to navigate systems of power,” AOC replied, “and start building your own power.” Martinez and Hollinquest have poured the foundation, and these young women are already constructing the second floor. Recommended for ages 7+ (Social Justice Topics discussed)

Director Biography
Linda Goldstein Knowlton is an Emmy-nominated producer and documentarian. Born and raised in Chicago, she observed of her childhood: “I was that kid with the flashlight under the blanket reading at all hours of the night. Knowing that I wasn’t a writer led me to find other ways of storytelling, and I felt an instant connection with the collaborative nature of filmmaking.” A graduate of Brown University, Goldstein Knowlton made her directorial debut in 2006, and We Are The Radical Monarchs (2019), which premiered at the SXSW Film Festival, is her fourth feature documentary.

SIFF 2019. We Are The Radical Monarchs

on May 31 | by Michael Strangeways