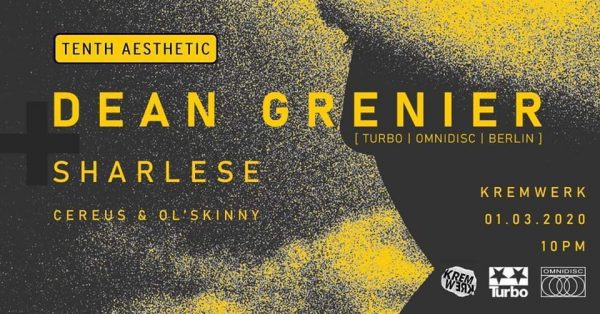 To start off the new year /just/ right, we are excited to have Dean Grenier come rock the decks with us at Kremwerk.

In addition to solo works Dean founded the record label and production outfit SISTER CITY along with collaborators EPROM and HEJ FUND. He is also a member of LA-based techno collective SUBSTANCE with a monthly night at famed Hollywood venue Sound Nightclub.

Dean Grenier’s DJ sets reflect a focus on deep and driving techno for which his recent production explorations have become known. His DJ talents have brought him all over the world, including the legendary club FABRIC in London and numerous tours around Europe and North America.

=========
The Kremwerk + Timbre Room Complex strives to be a safer space. The following actions or display of behavior will not be tolerated: bigotry, racism, sexism, transphobia, homophobia, misogyny, ableism, as well as the disrespect of the rules of consent. Our staff is here to support you.

Kremwerk is currently not an ADA accessible space. Club entry is through a flight of 12 metal stairs, with two small steps leading into the main part of the club. We have 2 restrooms with a total of 3 stalls and 1 urinal, all gender neutral.