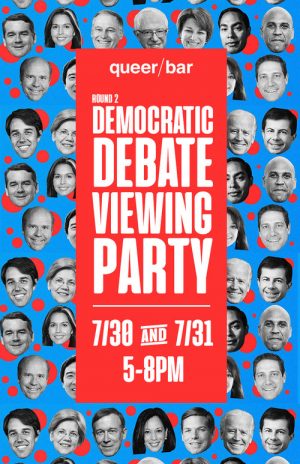 The first democratic debate has passed, but we’ve still got a long way to go to until #2020 election. The democratic party is having their second debate on Tuesday July 30th and Wednesday, July 31st . Join us at 5pm each night for a free viewing of the 2-night debate on the big screen at queer/bar! Enjoy delicious comfort food eats from Sunset Fried Chicken during the debate.
.
On Tuesday, stick around after the debate for a special political theme trivia with our weekly queer/trivia hosts, Chris and Collin! Trivia will start a little later than usual, but the $5 moscow mules will still be available starting at 7pm and going until trivia ends.
.
.
21+ Only

on July 26 | by Michael Strangeways