The Sunset Social at Fred | Wesley Holmes, Pezzner and Doza 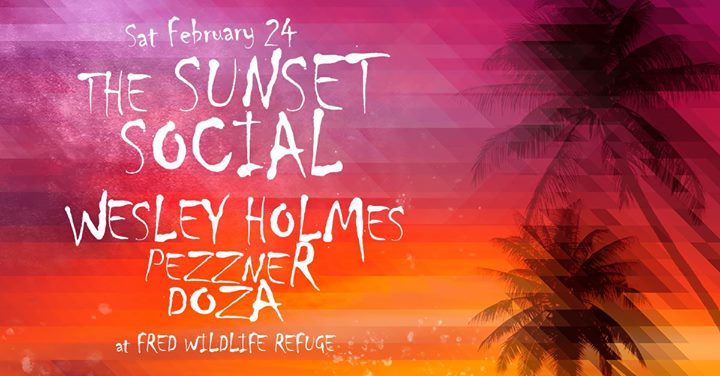 Hunt & Gather and Fred Wildlife Refuge are bringing the sunset indoors for a one-off house party with wall to wall floor to ceiling sunset visuals by Pixel Flip. Bring your sunglasses and GET YOUR COLORS ON!

Tickets and space are limited. Purchasing presale is recommended.

WESLEY HOLMES
https://soundcloud.com/wesley-holmes
Wesley Holmes has been an influential and integral figure in the Pacific Northwest for the past 20 + years and was amongst a core group that pioneered the house music scene in Seattle. His endless list of weeklies, monthlies, special events, residencies, and behind the scenes efforts helped provide a foundation for the thriving dance scene that transpires in Seattle.

His character and reputation have been shaped by his resiliency, focus on musical quality, and revered abilities behind the decks. As a result he continues to earn the respect and ears of new supporters while maintaining a loyal following in the Northwest.

In 2015 Pezzner founded the boutique imprint, “Hunt & Gather” with a focus on leftfield percussive rhythms and dance floor rarities. His “Native Language” project for Hunt & Gather was listed in Dixon’s Resident Advisor 500 year-end chart as one of the five most inspirational tracks of 2015.

DOZA
https://soundcloud.com/doza
If you’re any fan of deep house you’ve likely heard Doza’s music. Carlos has been contributing to the global underground house sound since 2001 as half of LawnChair Generals, one of the most respected early 00’s house music duos in the U.S. Doza’s sound is one that could be considered deeper, darker, more textured than the early works of LawnChair Generals.

The first Doza remix, Hanna’s “Time” on Viva Recordings in 2002 with it’s dubbed out pads and hypnotic rhythms might have been considered foreshadowing of his future body of work. From his initial offering on Doc Martin’s Sublevel imprint, simply titled “The Doza E.P.”, to his 2015 Get Physical debut “Ixchel”, and his latest The Nautilus on Hunt & Gather, his music always resonates with a common vibe; simple and articulate electronic rhythms that carry strong narratives that evolve over time and draw the dance floor in.

In 2015 Doza partnered up with Pezzner and Michael Manahan to form the dance label, Hunt & Gather with a mission to produce and deliver forward thinking dance tracks to the discerning dance floors of the world.

on February 7 | by Michael Strangeways