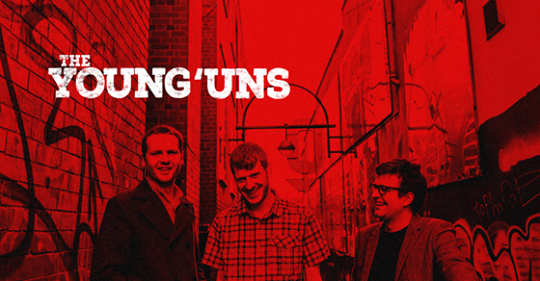 Just as election season is heating up in America, British folk trio The Young’uns are bringing their brand of political and social commentary to U.S. venues for the first time. Named ‘Best Group’ at the BBC Radio 2 Folk Awards two years in a row (2015 and 2016), they are igniting American audiences with their trademark harmonies, honesty and humor, commencing with their recent debut appearance at the Philadelphia Folk Festival.

The Young’uns – Sean Cooney, Michael Hughes and David Eagle – are part of the rebirth of topical music and have been said to explore British values using songs and stories. In addition to touring, they have hosted harmony and singing workshops at hundreds of festivals around the world. Influential UK music magazine Mojo has said of them: “Glorious….celebrating the uncelebrated with warmth, vigor and passion” while The Guardian has written: “The harmonies are glorious, the wit is waspish. The songs are powerful, the banter is relentless and the audience is happy. What’s not to like?”

on October 15 | by Michael Strangeways