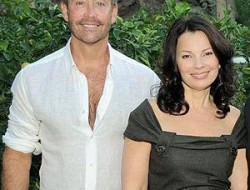 Fran Drescher working on new sitcom with her gay...

Pee Wee conquered Broadway; next year he comes to...

The Little Britain Boys are Back with a NEW show.

Fans of the British TV series/comedy team Little Britain can breathe a sigh of relief. For those of you not in the know, L.B. is a hugely popular sketch comedy series with two actors playing all the roles and it has become a cult hit in the US due to the DVDs, and runs on BBC America and an HBO American set season. Especially popular with LGBTQ audiences are the characters Daffyd, the only gay in his Welsh village, Bubbles de Vere, an obese drama queen, partial to nudist exhibitionism; Emily and Florence, a not very convincing cross-dressing duo; Vicky Pollard, an unruly teen; and assorted breast feeding adult men and incontinent old women. The duo, David Walliams (the tall, not gay one) and Mark Lucas (the chubby, gay one) have teamed up for a new BBC series, Come Fly With Me, which debuts in the UK on Christmas Day but it won’t feature their usual line of beloved characters. In a departure for the two comedians; the show is not being branded as a new series of Little Britain and it’s more of a standard sitcom format, set in one location, an airport. Still, the two will play over 20 different characters in the show:

In the show, centred on a budget airline called FlyLo, Lucas and Walliams play upwards of 20 characters, regular and fleeting, including Omar Baba, the airline’s Al Fayed-style owner; Mickey and Buster, a pair of hopeless paparazzi; Feargal, an Irish trolley dolly (‘I’m one of 10 brothers. We’re all gay. Except for Finbar. He’s bi.’); Simon and Jackie Trent, a husband-and-wife pilot team with a troubled marital back-story; Taj, the exuberantly bearded airport buggy driver; Precious, the evangelical coffee-concession proprietress; and a pair of Japanese schoolgirls eager to catch a glimpse of their idol, Martin Clunes.

No American air date has been given but this will undoubtedly get a run on an US television outlet next year. To read more of from the interview quoted above, go to the Daily Telegraph website.