A passionate group of LGBTQ activists in Seattle recently launched a new site for the LGBTQ community to share the pain and suffering they receive on a daily basis because of their sexuality and/or sexual expression.

The community organizers behind #HateStillHappens, (hatestillhappens.org) created the site to document and capture acts of hate against LGBTQ people. The group believes doing so will help shed light on real life acts of homophobia which often go unreported and further the narrative that true LGBTQ acceptance still has a long road ahead of it.

“Homophobia and transphobia cannot be cured by putting a rainbow on something,” said Luz’viminda Carpenter, Co-Chair of Seattle LGBT Commission. “As a society we need to go beyond tokenization. I want true liberation. I want an alternative vision where we get to be safe from fear by being in relationship and complicated relation to each other.”

As shown by the tragic violence against LGBTQ people in Orlando, homophobia is still an issue despite  the newfound ability to marry. Since the repeal of DOMA , there  has been an increase  in violence and discrimination facing the LGBTQ community in the last year. “Often, conversations become stuck when people gloss over the challenges and complexities of homophobia,” said Zachary Pullin, Director of Communications and Education of the Pride Foundation. “Many well-intentioned LGBT allies  are not sure how to act or don’t know how to individually fight  back against homophobia.”

The organizers of #HateStillHappens believe having people within the LGBTQ community share stories of how they have personally experienced discrimination and violence will help create more open dialogue about the issue. Once this conversation is started, members outside the LGBTQ community can start empathizing with each other more and begin working on a solution together.

“When we show up with our true stories of homophobia and give our accomplices in justice ideas for how to address the issue, then we will begin to witness these attempts to dehumanize our community as a mere accent and less of the language,” said Tristen Gardner, Health Educator with the Center for MultiCultural Health.

People interested in sharing their own stories about homophobia can do so on social media with the hashtag, #hatestillhappens. They can also visit hatestillhappens.org to see stories collected from Facebook and Twitter. 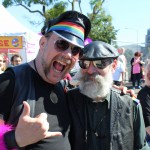 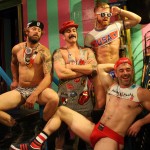 Next: Photos: The Sexy Men of BFD – Unicorn Takeover