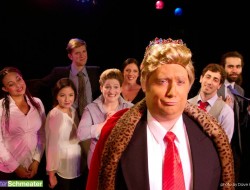 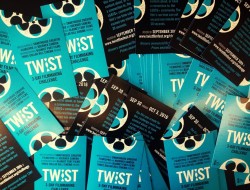 Seattle Opera used to be on our radar, back in the day, and we got press releases and invites to their productions. Somehow, we apparently fell off their Rolodex, or they decided “gays” and “opera” weren’t a good mix but they sadly don’t send us p.r. anymore but we’re still happy to plug them…once in awhile. Especially when they hit the opera ball out of the opera house stadium with fantastic designs like this for their upcoming production of Engelbert Humperdinck’s HANSEL AND GRETEL, his 1893 Märchenoper (aka “fairy tale opera”) based on the classic Brothers Grimm story. We’re DYING over the set, lighting and costume designs for this production which is being staged October 15, 16, 19, 22, 26, 28, 29, & 30, 2016 at Seattle Center’s McCaw Hall. Do note these are not original to Seattle designs…this is the highly acclaimed 2008 production that premiered at Glyndebourne Opera in the U.K. that was directed by Laurent Pelly and features costumes that are also designed by Pelly as well as lighting design by Joel Adam and a set design by Barbara de Limburg that turns Hansel & Gretl’s hovel into a big cardboard box and the Witch’s House is constructed like a shiny, bright supermarket.

In Laurent Pelly’s witty 2008 production for Glyndebourne…the tale becomes a gleefully ghoulish satire on consumerism, in which the forest is a maze of dead trees, devoid of any verdant softness. In a touch that feels all too relevant, Hänsel and Gretel’s family are forced to live in a cardboard house following economic collapse; the Witch’s gingerbread residence is a free-for-all supermarket; and the children who are freed at the end, after the Witch is thrown into her own ovens, are obese, having gorged themselves on the supermarket’s high-sugar, high-fat goodies. Usually, there’s a strong panto element to the portrayal of the Witch, but here the emphasis is on horror: (the witch is played) as a murderous matriarch, sharpening her knife, stripping down to her underwear, revealing wisps of mouldy hair under her wig and a ladder of bodyhair rising up her abdomen.

The sets are amazing but so are the costumes. The gender bending nature of this opera (which is traditional) has both Hansel and Gretl portrayed by women and the Witch is frequently played by a male tenor though a female mezzo-soprano originally played the role. In the Seattle/Glyndebourne production, the Witch is sung by John Easterlin and Peter Marsh.

While we j’adore the very realistic body suit worn by the Witch and her hot pink, Chanel-esque suit, we’re really loving the monotones of The Dew Fairy in her blue/grey make-up and wardrobe but over laid with clear plastic rain gear. It gives us ideas for Halloween… For tickets to this exciting production, head to the Seattle Opera website. There are some specials available as well:

Special Offer: Save 25% on most seats for the October 29 and 30 performances! No promo code needed; prices displayed online already reflect this discount. Limited time offer.

Attending on Saturday, October 29? Extend your evening with our Backstage Halloween Party after the opera! Age 21+. Performance tickets and party tickets sold separately.

Goldstar also have discount tickets available in a variety of price ranges, as well. Go HERE.