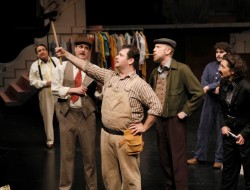 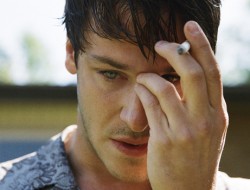 May 20, 2017 Comments Off on Tesseract Is A Dance/Film Hybrid That Astounds Views: 2107 *Seattle Theaterland, Arts & Entertainment, Dance, Film, Modern Dance I’m full of uncertainty when I write about things that are outside my fields of expertise.  Or, things that are not within my wheelhouse to use a baseball term which is another thing that is almost as far outside that wheelhouse as my lack of qualified knowledge about the world of dance, both classic and modern. So, I approach any dance based theatrical experience with a feeling of foreboding that:

Which is why it’s tough for me to write about the current production at On the Boards, Seattle’s beloved alternative performance arts theater venue noted for bringing vital and exciting and avant garde performance pieces from the worlds of traditional and mostly non-traditional dance, music, theatre and film artists who very frequently incorporate some or all of those elements into their mixed media approaches to creating art.

This weekend’s offering at On the Boards is called TESSERACT and it very much follows that multi media tradition as it incorporates film into the world of dance but obviously also influenced by theatrical conventions and overlaid with a strong sense of musicality as well. It’s a two part presentation created by the partnership of filmmaker Charles Atlas and the dance artists/choreographer duo of real life partners Rashaun Mitchell and Silas Riener. At this point I’m going to completely cheat and use the excellent description of TESSERACT from the On the Boards website mainly because it includes symbols that are far easier to copy than type:

Tesseract is a work in two parts: Tesseract ▢ and Tesseract ◯.

Part one (Tesseract ▢) is a stereoscopic 3D video — a six-chapter work of science fiction, filmed with a mobile camera rig (a Steadicam) that moves with the choreography. Each chapter combines a specific set, choreography, and camera motion to encompass pas de deux and ensemble pieces, choreographed by Mitchell and Riener. Atlas’ distinctive video manipulates the 3D footage to combine live dance with animation, producing otherworldly dimensions emanating beyond the stage.

Part two (Tesseract ◯) is a performance for multiple dancers and cameras — the footage of which Atlas manipulates in real-time and projects back onto the stage. Tesseract ◯ superimposes the space of dance with live cinematic production, rendering a choreographic analogue to the four-dimensional cube from which the piece takes its title.

The Tesseract project was conceived and influenced by science fiction writer Robert Heinlein’s 1941 novella And He Built A Crooked House which is about an architect who designs and builds a house based on a four dimensional cube, a tesseract which consists of 8 cubed rooms. When an earthquake breaks the fourth dimension, the occupants of the house are tumbled into a journey through both time and space through parallel worlds, times and existence. For fans of the genre of science fiction and of time travel stories specifically, it’s all familiar ground as individual dances reflect the journey taken by the 7 dancers featured in the film. Heinlein might be best known to audiences today for being the author of Starship Troopers which was made into an interesting film 20 years ago by Paul Verhoeven.  Heinlein’s controversial work touched on many issues that frequently got him into hot water, but his libertarian outlooks was progressive and included work that expressed sexual liberation with characters who were frankly and unapologetic about their fluid sexuality.

As a reader and fan of Heinlein, I saw and appreciated those elements but I think Tesseract also references other science fiction work that has a basis in physics, math and time travel, most specifically A Wrinkle in Time the beloved YA science/fantasy novel and subsequent series written by American writer Madeleine L’Engle which also uses the tesseract theory as an explanation for time travel.

In the story, Mrs Who and Charles Wallace explain to Meg that they will be traveling by “wrinkling time” through a tesseract and that “the fifth dimension’s a tesseract. You add that to the other four dimensions and you can travel through space without having to go the long way around. In other words, to put it into Euclid, or old-fashioned plane geometry, a straight line is not the shortest distance between two points.”[10]

In the novel, the tesseract functions more or less like what in modern science-fiction is called a space warp or a wormhole, a portal from one area of space to another which is possible through the bending of the structure of the space-time continuum. This meaning is unrelated to the mathematical notion of a tesseract, a shape analogous to a cube in a space with four spatial dimensions.

Tesseract ▢ opens the evening (and requires special 3-D glasses which will fit over your normal glasses if you happen to wear them, provided you don’t wear huge frames…) and lasts about 50 minutes or so. Being a person who loves film, it was the more interesting half of the program for me.  The 3-D effect is not gimmicky but only enhances the work; it’s subtle…not intrusive and obvious. The film is broken up into several dance segments and each one is just about the perfect length for a dance piece for a non-dance fan. The sequence “Fog” is beautifully filmed and danced; it’s haunting and fluid. The closing sequence (which I’ll call “Rope”) only features Rashaun Mitchell and Silas Riener entwined to one another in a web of ropes. Is it a metaphor for making art and the complexity of human relationships expressed by a pair of artists who are both personally and professionally linked? Perhaps. Regardless, it’s an authentically mesmerizing piece about connectivity and the ties that bind all of us.

Tesseract ◯ is the second half of the show and it features six dancers and a camara person who is apparently live filming portions of the performance as he carefully moves throughout the proceedings. The strength of the dancers and the choreography is vividly and powerfully on display here; these are highly accomplished athlete/artists and the work is stunningly executed. For me, it did feel a bit long. I’ll be honest that my attention and energy started to lag a bit towards the end, but that’s a personal reflection from someone not normally an aficionado of modern dance.

As a unified whole, TESSERACT is a work of great beauty and thoughtful power and imaginatively executed by Mr. Atlas, Mr. Mitchell, Mr. Riener and all the artists involved. Highly recommened.

Tags: On the Boards, Tesseract