Van Dyke’s Soapbox: DADT is dead but War is...

My Soapbox: The State Budget Crisis 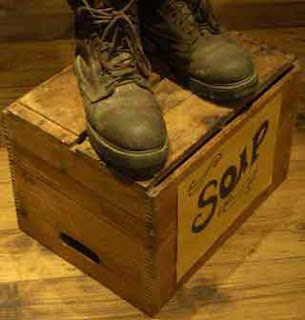 Everyone in the state, (well, everyone in the state who isn’t a selfish bastard and/or cares about the needs of the poor) is upset about our disastrous state budget crisis. Billions have to be cut from the budget and education and health benefits for the poor are on the chopping block. It’s heart breaking and it’s terrifying and it WILL effect the lives of thousands of people in this state and not for the better. People could die. There’s a lot of anger and blame and finger pointing going on, and bitching about the failure of the government. There’s also a lot of Monday morning quarter backing. “Why doesn’t the state legislature just pass some new taxes?” or, “Why don’t they cancel the Alaskan Way Tunnel project or the Light Rail project and use that money to shore up education/health?” There’s a lively discussion going on over at The Stranger’s Slog and I put my two cents in regarding those questions. Here’s what I said:

1)Thanks to Tim Eyman and initiatives passed by the state’s voters, the state government can’t just pass an income tax. It has to be voter approved.

2)The government can’t move money around from one thing to another. When levies are passed, that money raised can ONLY be spent on THAT project. They can’t cancel the tunnel and move that money to anything else. It’s illegal.

3)This is an awful budget and it’s life threateningly dangerous to the poor. Yet, to everyone I saw bitching about this budget on tv last night and blaming Gregoire, I have to ask, “Hey, Poor Person! Did you VOTE last month? Did you vote YES for the Income Tax?” There are far more “poor” people in this state than rich people. Based on that alone, the Income Tax SHOULD have passed. The lower class fucked up and didn’t pass this measure and the Income Tax Initiative people fucked up by NOT marketing the measure to the poor instead of those dumb, but well meaning ads featuring Bill Gates Senior that targeted the rich.

Yes, it’s going to be rough for the next 2 to 4 years. At what point, do “we” the voters of Washington State, wake up and smell the burning coffee? At what point do we give in and admit, “This is not a recession. This is a Depression.” I hate to be the Gloomy Gay Gus, but it’s tough out there and it’s going to be tough for quite a long time. Things are going to get darker, before we see any dawn.

No one ever said, that living history was easy, folks. But, we need to focus our anger and fear and make sure this gets fixed for the future. The Right Wing Conservatives don’t care about the poor and disenfranchised. People who DO care, have to band together and do the right thing. Taxes are not evil. Social programs are not welfare. They are the correct thing to do to ensure we are humans with values and priorities and respect for all other humans. Living a healthy life with self-respect is not just a right of the wealthy. ALL citizens have to have that right.

Or else, we’ve failed as a society.

One Response to My Soapbox: The State Budget Crisis