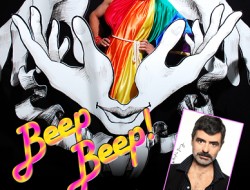 Hard Times Press, the ‘zine that originally started as a weekly club night at the now defunct War Room, is planning to release it’s latest issue this coming Wednesday, September 28th at Electric Tea Garden (1402 E. Pike St., Seattle). The Hard Times crew has planned one of their famously ecclectic parties to commemorate the occasion. Guaranteed to be a good time!

Among the scheduled entertainment: Performances by Jinkx Monsoon and artStar, a live set by Glitterbang (happy birthday Nicki Danger!), and DJ sets by General Meow, Hooker, Tony Burns, DJ Skiddle and L.A. Kendall. Ginger Girl Photography will be hosting an interactive photobooth, and Anton Bomb (aka Tippet) will be behind the bar pourin’ ’em nice n’ stiff! The Hard Times crew has an extra special trick up their collective sleeves…they’ll be conducting a raffle for a chance to win a 2 nights stay in Palm Springs, CA. for Qulture Qreative’s gay pride event “COMPOUND” (November 4, 5 and 6 2011). A variety of entertainment to curb any queer appetite!

Of course, the release party would be nothing without the latest issue, and there are going to be plenty of copies available at Wednesday night’s festivities. This issue boasts some incredible content too! There are pieces by and about: Chi Chi & Chonga, Katey Pants (aka DJ Roy G. Biv), Phyliss Navidad, Sean Fancy, Sylvia O Stayformore, L.A. Kendall, Debora Spencer, Dustin Curtis and SO MUCH MORE! Rumor has it that one of Seattle’s hottest talents takes on the centerfold this issue. You’ll just have to come to the party to see it with your own eyes!

For more about this event, check out the Facebook invite by clicking here!