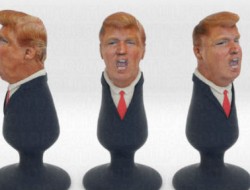 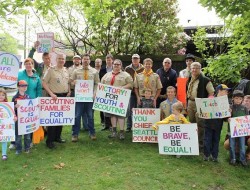 Will The Boy Scouts Allow Gay Adults To Volunteer?... Yesterday, Facebook lit up at the realization of a planned “Heterosexual Pride Parade” throughout Seattle’s Capitol Hill gayborhood on July 25th. Anthony Rebello, a hetero-activist of sorts, created the event to “celebrate (his) right to be heterosexual, and to encourage younger heterosexuals that they should be proud of their heterosexuality.”

Of course, Seattle’s LGBT community collectively pounced on the event page and let loose with their unfiltered thoughts on the ill-advised event, especially the route that Mr. Rebello had chosen for his parade.

“In response to the whole gay marriage thing, as an artist, and an individual, I feel the need to voice my opinion on the subject. I apologize if my opinion hurts anyones feelings,” Rebello said. “I think it’s a trend. A cry for attention. From your government, a distraction. For $.” Oh, but he didn’t stop there!

“I have also created an event: Heterosexual Parade. Gay Mafia? Maybe animals should be allowed to get married? Would they govern and tax them too? While they’re at it, how about equal rights for insects…I don’t agree with boys turning into girls, and I don’t agree with girls turning into boys. The way I see it, some boys never turn into men, and some girls never turn into women. What a shitshow.”

Well, after all the comment-wars on the event page, Anthony Rebello was the only ignorant fool in attendance for the first ever Seattle Heterosexual Pride Parade. Better luck next year, bro!