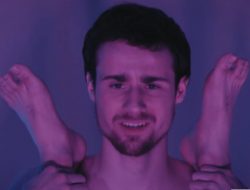 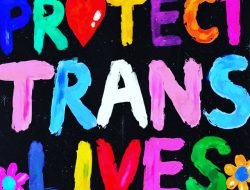 Today, queer-run label Get Better Records releases compilation album Sunday, Someday. The community-driven collaboration album celebrates friendship and connection and features a lineup of queer, trans, non-binary, and agender artists including KOJI and Full On Mone’t from Harrisburg, PA, as well as LA-based Potty Mouth, UK-based Nervus, and Philadelphia-based Solstice Rey. The five artists were scheduled to tour the UK together in early 2020 but that tour was ultimately canceled due to the pandemic. The artists continued to stay in touch over weekly Sunday Zoom calls, which led to the collaborative creation of the album to help support top surgery aftercare for Full On Mone’t and the LGBT Center of Central PA.

“We wanted to be a part of creating more access to LGBTQI+ spaces,” says Ally Einbinder of Potty Mouth. “These are resources none of us were fortunate enough to have growing up.” “Our weekly Zoom call has been a space for collectively imagining the world we want to live in,” says KOJI.

“These are lessons that I’ve learned growing up in Harrisburg and come to better understand through community in pandemic. Projects like our record and this coffee collaboration will hopefully show that you can use your time, talent, and resources to grow more access to spaces for care and creativity.”

While the album developed initially to support a member’s fundraising efforts for top surgery, when they reached their fundraising goal, the focus shifted to supporting aftercare expenses and LGBTQI+ youth initiatives. In partnership with Harrisburg, PA coffee roaster Little Amps, Get Better Records launched a pre-order bundle benefitting the LGBT Center of Central PA’s afterschool program by funding acoustic treatment for youth with sensory needs. This commitment to supporting queer community members is deeply personal for the group.

Living remotely from one another and in relative isolation during the pandemic actually created more space for collaboration. “When pandemic and uprising hit, our instinct was to turn toward one another, to create together, and to support one another,” says KOJI. “Whether we’re doing mutual aid, community care, or we’re out at a protest, we had each other to make sense of the world and what was going on. This project is just an extension of the care that we give to each other and our communities.”

Every aspect of song production and artwork creation for the album was done within the group: Nervus contributed guitars and drums on both Solstice Rey tracks, Em Foster (Nervus) and KOJI mixed and mastered all of the tracks on the album, Abby Weems (Potty Mouth) designed the album art, and Nervus’ manager Megan Foster Rose designed the website for the project. Collaboration, however, extends far beyond album credits, and the power or sum of the project is based on the invisible work and the creativity that takes place within authentic relationships.

“It’s exciting to work on something with people I feel so connected to and understood by,” says Abby Weems of Potty Mouth. “This release is an opportunity for all of us to use our collective passions, skills, and resources to support each other as artists and as people with our own personal needs.”

“This record is a celebration of living in community,” says KOJI. “It’s a project that asks, ‘what world is possible when everyone’s needs are met?’”