There was an overwhelming amount of information on “The Magic Pill” presented at the Gay City Health Project hosted public forum held on Wednesday April 27 at the Erickson Theatre on Capitol Hill. To help the audience cope with swallowing it, Gay City designed an interactive community dialogue that was presented with the assistance and input of HIV experts and local leaders. Their guidance walked the audience through the different aspects of PrEP (pre-exposure prophylaxis); the science, the potentials and the limitations. PrEP uses an HIV antiretroviral (ARV) medication that has a 44% success rate in men who have sex with men before coming into contact with HIV. PrEP could prevent the spread of HIV. The purpose of this forum was to give each person the ability to make an informed decision on their own.

It has been a long time since Gay City held a public forum, but considering the diverse impact on the LGBT community over PrEP,Gay City couldn’t have picked a more suitable time.

Although the PrEP sounds promising, it does come with conflict.

These are words from Michael Weinstein, co-founder and president of AIDS Healthcare Foundation (AHF) and the forum’s strongest anti-PrEP presenter for the night and a national leader in the fight against HIV/AIDS. “AHF is the largest global AIDS organization and Weinstein oversees $330-million organization currently serving over 157,000 clients in 26 countries around the world,” according to his Gay City bio.

He believes that the iPrEx study with the 44% efficacy never got approved and that the company, Gilead ,that makes the pill (Truvada), is after our money.

When some participants of the study were asked every month if they had been adherent to the ARV medications they said “yes”. Weinstein believes they lied as their blood showed that they did not have the ARV in their system. Weinstein also wants to disagree with the notion that condoms, regular testing, and other HIV preventatives is failing in the LGBT community, even though we are the most steadily increasing HIV infected group since the early 90s, according the Centers for Disease Control and Prevention website.

“The idea that we are going to medicate the entire gay community, to me, is outrageous!”

Michael Weinstein’s outrage stems from the fact that the medications Truvada (tenofovir and emtricitabine) or just tenofovir used for PrEP, can cause short and long term side effects. The side effects could include: nausea, vomiting, stomach aches, weakness, tiredness, liver problems, lactic acidosis (which can be fatal), severe liver problems and it also, according to Wikipedia, can cause increased and decreased fat levels. The fat around the abdomen, chest, and back of neck could increase while the fat in the face, arms and legs could possibly decrease. The fact that we would be giving HIV medications to 20 year olds who don’t really need it, in comparison to HIV positive individuals who do, heighten Weinstein’s pitch.

“What is the rush?” he emphasizes.

In 2009, there were 30,797 fatal car crashes, a fact presented by Jim Pickett, Director of Prevention Advocacy and Gay Men’s Health at the AIDS Foundation of Chicago.

But what does this have to do with PrEP?

Pickett creates a driving analogy to help explain perseverance over PrEP fears. Despite the dangers, people still need to drive. Instead of never getting back into a vehicle, we learn to protect ourselves along the way by checking our tires and our brakes. Safety features like airbags are installed as preventatives. We persevere over our fears. The same perseverance can be applied to PrEP. Side effects can be dealt with as they arise, just like a flat tire. We can change our direction at any time with steering to avoid obstacles that come in our way.

“PrEP is not for everyone. But people who want to use PrEP, who need to use PrEP…they should have the opportunity.” Pickett continues, “PrEP doesn’t replace what we already have…things like condoms, counseling, and regular HIV testing. Expecting everyone to use condoms all the time is unrealistic…there are a number of reasons why people can’t, or won’t, use condoms. They deserve a choice.” A 44 percent decrease in contracting HIV is a lot better than 0 percent efficacy from not using condoms at all.

This isn’t an easy road of discovery. Pickett knows, but he still asks the question: “Where would we be without the research?” The HIV Vaccine Trials, The Microbicide and the CAPRISA study, PrEP studies such iPrEx and even FEM PrEP (that we are still in the process of learning what happened). “How many infections would we avert?” Pickett wonders.

“It saved my relationship.”

So what is it like to be in a serodiscordant partnership?

One individual who would like to remain anonymous said, “You go from a healthy relationship to almost nothing. It is not as passionate because of fear of giving it to the other person. Depressing is the word.” Although he is hopeful that the fear will eventually work itself out.

Literski has firsthand experience that PrEP has the potential for greatness and could benefit relationships that have opposite HIV status partners.

“I haven’t seen this supposed negative come out of it.”

What are we trading?

The most obvious answer is: money.

8,000 HIV positive people are already on the waiting list for the pill. Who is going to pay for PrEP? No funding program has yet been established. Out of pocket, PrEP wil cost $10,000, but this mouth-dropping price doesn’t even include ongoing care. There will be extra costs for Dr. visits, lab fees, and other medical procedures that go hand in hand with a daily pill regimen.

What other problems are there?

Other major concerns besides cost to consider are: access, acceptability, adherence, the behavioral hazards (such as increased unsafe sex and HIV resistance), and figuring out who gets PrEP.

There is still a lot of progress to make and busy work to be done.

“An FDA indication is important because it will break down a number of barriers to access Truvada for prevention. Right now, Truvada is only indicated for treatment of people living with HIV. That doesn’t mean that doctors can’t prescribe Truvada for prevention purposes for their patients, but the prescription would be what is called ‘off label’. Not all doctors or patients are comfortable with using a drug in a way that hasn’t been officially indicated, otherwise known as ‘off label’.”  Jim Pickett

Executive Director of Gay City Health Project Fred Swanson’s advises: “Help determine the research.” What he means is, every sexually active man who has sex with men must ask themselves: What are the questions I want answered before moving forward with PrEP?

After 20 years, Fred Swanson is leaving as the Executive 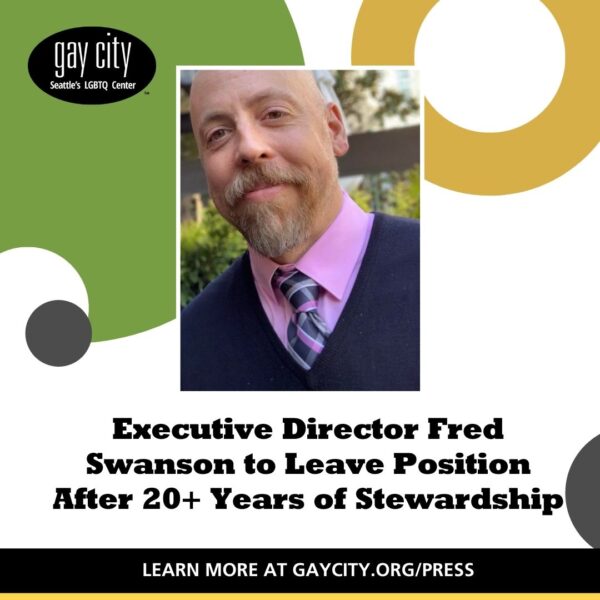 “Bearing Witness: The Impact of HIV/AIDS on Black LGBTQ People”

Bearing Witness: The Impact of HIV/AIDS on Black LGBTQ People

...
Previous: New Queer on the Block: Why are gay waiters so rude and where is the love?
Next: “How Theater Failed America” Benefit Performance for Intiman Theatre