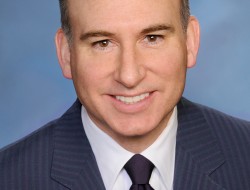 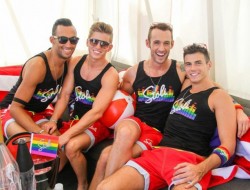 Julie Goldman is a Jewish lesbian comedian (well that is what Wikipedia thinks you should know!) She is a talented standup comedian you can watch every week on the ‘People’s Couch’. She also has a very funny web series called ‘Gay Street Therapy’ with her writing partner, Brandy Howard. Julie will be performing her live show the Lady Gentleman in Seattle at the Theatre Off Jackson on June 20 & 21. Tickets are available here.

ED: Wikipedia thinks the two most important things to know about you are that you are a lesbian and Jewish. What do you think?

ED: I read that at age 15, you had your first show at the Comedy Connection. How did that happen?

JG: I went to Hebrew school my whole life. One of the things they offered was a comedy class. It was life changing, of course. We went to a youth group convention and there were comedians performing and teaching us. I asked one of the guys how it works. How do you become a comedian? He invited me to do 5 minutes on his show at the Comedy Connection. I just kept going back after that.

ED: What is your favorite TV show?

JG: Oh god! I truly watch a lot of television. I mean like an obscene amount. My favorite show, my good old standby is ‘Family Guy’ and/or ‘American Dad’. I have to say right now that I am really into ‘Game of Thrones’. Oh, and I love this show on AMC called ‘Small Town Security’.

ED: If you could be a character in ‘Game of Thrones” which would you pick?

JG: (Laughter) I think I would be one of two. Well, first of all, the fact that Brienne has not totally come out as a lez really bugs! We are supposed to believe that she is in love with Jamie or something! He can go suck himself. There is every kind of sex going on except lesbian. With that said, I would be Brienne or Tyrion.

ED: How did you come up with the title Lady Gentleman for your show?

JG: I do a bit where I describe myself as a masculine woman. I just let words flow and it came out. It also came from my mother being obsessed with me being very masculine. She often asks me “Why do I want to be a man?” I don’t want to be a man. I never wanted to be a man. I am however on the butch side, the manly side. So it just came about from all of this. I am just a Lady Gentleman. I am the Lady Gentleman about town. I can be all the things I want. I can fulfill all the spectrums of the genders in my own self and the way I want to do it.

ED: What do you think of Laverne Cox on the cover of Time Magazine?

JG: I think it is great. Good for her! I think visibility is great. I think that transgender issues are on the forefront right now. I hope that as a group or community that they are able to accomplish everything they want to accomplish. I think she is a good spokesperson particularly because she seems to be able to articulate the issues in a way that people can understand. She is very relatable.

(ED: While speaking about Laverne Cox, the controversy around the use of the word “tranny” came up and Julie wanted to weigh in on the topic.)

JG: I think the use of the word Tranny is fine. I think it is all about intention. I think it is offensive that people would tell RuPaul what to say. RuPaul can say anything she wants. She came up through the Ball culture and earned her bones. She created a lot of these terms and they have nothing to do with transgender. They have to do with drag and comedy. They are making light of drag queens. I think it is good to take the power away from words. I know as a comedian that I don’t want to be told what to say or what words I am allowed to say. I think we all have to take responsibility for what hurts us or offends us. If everyone came out with a list of words that they don’t like being used to describe them, then no one would be able to speak. Certainly not in public. TV would be shut down. No one would be allowed to do anything. I know that is not the majority but I am coming from a comedians point of view. I am not going to spend my days trying to change what other people are saying or doing. I can only do me.

ED: Do you have any rituals or habits you do before a show?

JG: I don’t know if it weird but I used to chain smoke before a show. I quit doing that but I will have one. I do want to be solitary before a show. I can’t be social. I am very focused before. I pace around and get in a zone.

ED: Are you working on any new projects?

JG: Besides ‘People’s Couch’ I am just doing stand up. My writing partner, Brandy Howard, and I are working on a pilot for a new show. We also have a fun web series called ‘Gay Street Therapy’. We go to different lesbian parties and get drunk then we interview drunken people and give them advice. It is a lot of fun.

Julie will be performing her live show the Lady Gentleman in Seattle at the Theatre Off Jackson on June 20 & 21. Tickets are available here.