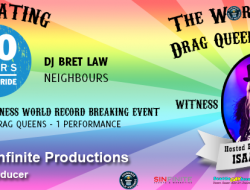 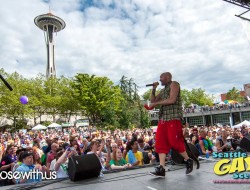 It takes a Village of Volunteers like the adorable Elnora and Megan to put on Pride! Come volunteer! Also: HAPPY BIRFDAY, MEGAN!!!

C’mon kids….it takes some effort (a lot) to put on a huge Pride event. The folks at Seattle Pride are ALL volunteers but they need several more to make sure the Parade, happening on Sunday, June 29th starting at 11 am along 4th Avenue in Downtown Seattle goes off without a hitch.

I know they really need crowd control handlers so for all you Bossy Little Bottoms out there, here’s a FABULOUSLY easy job for you to do yelling at folks to move where you want them…y’all are REALLY good at that!

You can STILL sign up to volunteer (Go HERE) or just show up on Saturday, June 21 at the Volunteer Orientation at the Hotel Monaco which is right on the Parade route.

Feel free to bring along people who have not signed up to volunteer yet, we will have a sign up sheet there.

You should do it for many reasons…it’s a great way to give back to the community being foremost. But, also do it for the adorable Megan Duncan, the volunteer coordinator at Seattle Pride (and Three Dollar Bill Cinema; gal wears a LOT of hats!) It was her Birfday this week, plus she’s awesome, plus it’s her final year at Seattle Pride for awhile ’cause she’s going to school in the fall.