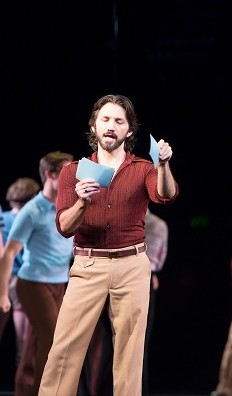 A Chorus Line at the 5thAvenue Theatre is an exhilarating show. It gives you a personal glimpse into the magic behind the scenes of musicals. Being a complete newbie to this show, I was very pleased with the production. I really believe that this cast gave new life to the award-winning original production that started off-Broadway in 1975. I was fortunate enough to interview Andrew Palermo who portrays Zach a key cast member in the show. We spoke a bit about the parallels between Andrew’s life and his onstage character along with some other fun tidbits. Don’t miss this amazing show! Click here and get tickets now!

ED: What was it like to work with Bernadette Peters?
AP: Incredible! I was pretty young at the time, 25 maybe. She is such an icon so it was a big deal. I just kept thinking ‘Wow I am sitting with a legend!’ She is wonderful. All of the reasons that she is what she is were abundantly clear at every moment. She was a good example for how to be gracious and humble while still owning what you are. She can be the star and still be a person at the same time.

ED: Have you been able to work with any other legends over your career?
AP: Well, my first Broadway show was How To Succeed In Business Without Really Trying. So, I got to work with Matthew Broderick. He was a childhood hero of mine from Ferris Buehler’s Day Off and War Games. I was only 22 when I got that show. It was only my second audition in New York. He was pretty young at the time. I think he was maybe 34 during that show. But, I still looked up to him. He is such a pop culture icon. He is also a great guy and hilarious. He was so cool with the cast. Then Sarah Jessica Parker came into the show and she was great. Then John Stamos came into the show and he was great as well. That was my first Broadway production contract experience which is pretty awesome. I just remember that year and keeping a journal of all of the different celebrities I met when they came back stage. It was pretty mind blowing at the time. I also grew up with Taye Diggs, and Idina Menzel is an old friend of mine as well. So going into Wicked, she and I were very close. That was my last Broadway show. Now, she has turned into an icon in her own right and it is pretty cool to know her from the beginning.

ED: How did you decide to go into business with Taye Diggs?
AP: We went to the School of the Arts in Rochester, NY together. We became best friends and he is a trained dancer as well. Over the years while we were performing we would both choreograph on the side and taught some classes together. So when I left Wicked to go into choreography full time, Taye and I wanted to create a fundraiser for Dancers Respond To AIDS (DRA). We wanted to produce an evening of dance but we had never done anything like that before so we approached DRA and asked them if they could help us with the event. They agreed but wanted us to be a little more official than just Taye and Andrew. So that is where our company dre.dance was born. We went strong at that for about 8 years then I moved to California. When I moved we sort of put the company on an extended hiatus. It is on hiatus for a while but I will never say that it is dead.

ED: What made you step away from performing?
AP: I had been performing since I was 5 and literally never wanted to do anything else. I went to high school and college for it. Then I went straight to New York. I did a bit in LA as well. I think a few things contributed to it. I kind of got burnt out. I was very fortunate that I worked consistently but that can kind of take a toll on your body. I had some surgery. As I started choreographing the last few years, I also realized that I really liked having my own creative vision. Unless you are one of the big stars we talked about, you don’t get a heck of a lot of creative say in what you are doing on stage as a performer. I just got to the point where I wanted to have more of it. I also always wanted to lead a show. When you do hundreds and hundreds of shows you realize that you aren’t having fun anymore after a year or year and a half. You just have to decide when it is time to move. So that was the transition. I am kind of a black and white guy. I decided I needed to make a clean break and flip to the other side of the table. So this production of A Chorus Line is the first performing that I have done in ten years, which is crazy.

ED: What made you decide to come back for this show?
AP: Well, Brent Sawyer is the musical director of the show. We had met before and are Facebook friends. He messaged me over the summer and asked if I would be interested in performing in the show. It was just one of those things. It was a good time slot. I had those months free and I had never been to Seattle before. But most importantly, it was very interesting to me that I would be playing a director/choreographer which is what I am. That is just interesting in itself. I also knew that I could take this opportunity to better my skills as a director/choreographer to go back and remind myself what it is like to be on stage and receiving the notes and having to give of yourself as a performer. That has already done wonders. It is a completely different thing being on stage and doing it than being out in the house and saying to do it. I couldn’t pass up the corollary between Zach’s life in the show and my life or Michael Bennett’s life. Zach and Michael Bennett are on different levels than I am on. I haven’t had a million Broadway shows as the director/choreographer but it is still the same thing. They both started out as performers and made their way into what I do now. It is so easy for me to step into this role and completely understand what the character is going through.

ED: How do you feel about all the parallels between your life and this show?
AP: It is great. It is very nice to play a role that you don’t have to stretch for. I mean it is great to stretch and play a good character but I don’t know if I would have been ready to do that at this point in my life. I have been out of the acting game for so long. It felt easy to put these shoes on of Zach’s. I understand exactly what he is talking about and what is he going through. The majority of the times in the show; if I am leading one of the characters, cracking out counts in a choreographic sequence, cutting people from the audition, all of these things are things I do in real life on a daily basis. So, this part feels great and natural to me. It is fun to be able to push myself into ways that maybe I don’t feel so comfortable but maybe Zach does. He is a little more tyrannical than I am, I hope.

ED: Are looking at or thinking about any future roles?
AP: No, not really. It is completely possible that this could be a one off maybe a little blip of performing. I could still spend the rest of my career directing, choreographing and being a professor at UC Irvine. But, who knows I could come back to doing more performing. I don’t think I will ever be a full time performer again. I love doing what I do and creating new work. That is pretty much where my passion is, but it has kind of opened up again with this opportunity. I could see a little role here and there occasionally. Nothing is really jumping out at me at the moment. There is nothing I am dying to play right now. I guess if I could play Sweeney Todd I would do that.

She’s coming to town this weekend, (Saturday, November 2nd) for Look up Mari Nelson’s credits on Playbill.com as I did Review: ROCK OF AGES. Book by Chris D’Arienzo. Arrangements and