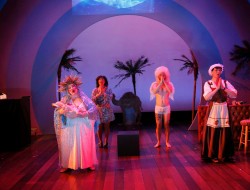 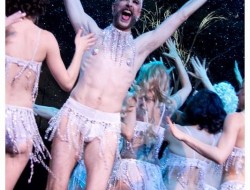 December 12, 2014 Comments Off on DeLa and Company Are Baaaaaaaaack To Bring You Some Homos For The Holidays Views: 1669 Arts & Entertainment, Drag, Drag O'Tainment

Back for the 6th year! Homo for the Holidays!

A popular Yuletide tradition since the Warren G. Harding Administration, DeLouRue’s HOMO FOR THE HOLIDAYS returns to Oddfellows Hall on Capitol Hill just in time for 2014 HoliGay Fun. And, while the show’s basic plot remains the same year after year after year (unlike Dina Martina and “Ham For The Holidays”, they don’t write all new material each year) this go round does feature the loss of Jinkx Monsoon and Major Scales, (who are off in Europe doing “The Vaudevillians”) and the addition of two funny gentlemen, Scott Shoemaker (a fan favorite from Re-bar’s Brown Derby Players) and Josh Hartvigson (aka “Gary Gloryhole”).

But, everyone else returns including hostess/star/RPDR Season 6’s fourth runner-up BenDeLaCreme, along with her co-producers Kitten LaRue and Lou Henry Hoover. They’re joined by the always delightful Cherdonna Shinatra, Faggedy Randy, ilvs strauss, The Luminous Pariah and “The One The Only Inga”.

For those of you who haven’t joined them in their previous 5 years of shows, here is some breathless boilerplate about what you can expect:

Homo For The Holidays is a hearty holiday fruitcake packed with rollicksome reindeer, enticing elves, ghostly guests, sexy snowstorms, agile angels, musical Maccabees, and new ways to define coming home. It’s not Christmas in July, it’s Pride in December! Light your menorah, stuff your stockings, and join our chosen family in celebrating our favorite wintry holiday of all, Homo For The Holidays!

“Homo” opened Thursday, December 11 and continues through Dec 27 with many shows already sold out and some days featuring multiple performances. Tonight (Friday the 12th) there are shows at 7pm and 10pm; the 7pm is sold out but a few tickets remain for the 10pm! HURRY to grab yours!