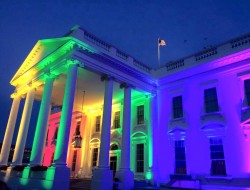 President Obama Orders White House To Be “Rainbow’d” To... 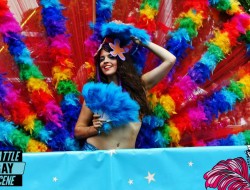 In an apparent move to snatch the Craziest Christian Award from Marguerite Perrin’s “She’s not a CHRISTIANNNNUHHHUHH!” Becky Wagner Rommel of Elletsville, Indiana recently took a break from cleaning her house to record an cell-phone video pontificating about the detriment of marriage equality sweeping across the United States of America.

Let’s just say that she is definitely not acting like a good Christian woman should behave herself.

“This is a really sad day for me. Everything that God created his church to be — as man as woman — Adam and Eve — Five justices decided that God was wrong!”

For four and a half amazingly hilarious minutes, Rommel spews Fox News word vomit and a prayer about America’s founding fathers (who, by the way, were deists) and proceeds to go on a Bible-thumping rampage. That’s not all, folks. Miss Rommel then unloads about Islam, apparently unaware that Jesus Christ was definitely not a white man and probably never followed any of the rules she thinks she needs to be following.

She then ends her rant by saying that God said that men are only to be married to women, oblivious to the fact that that was never explicitly written in The Bible and that the book itself wasn’t written by God. All in all, such a fun watch, right?

Here’s the link to watch the hilarity, since Facebook is being really dumb.