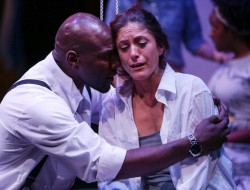 Can Can and Fred Wildlife team up for an Election Day Cabaret on Tuesday, November 8, 2016.

It’s Election Day 2016 in these here United States and it means we need to VOTE (if you haven’t already done so) and help others to vote (offer to drive folks to the polls or take their ballots to a drop box or whatever you can do to aid people).

And, since we’re all HOMOsexuals and allies around here we’re gonna encourage you to vote for Hillary Rodham Clinton as President. Yes, some of us have reservations about returning The Clintons to the White House but Hillary is VERY qualified for this job. She’s smart, determined, experienced and by far the best choice in Election 2016. The other choices…no. Dr. Stein from the Green Party seems like a terrific person with good progressive values but…she can’t win and if by some freak chance she did win, how is she going to govern without a party in power to support her? (Also: she has zero experience in governing.)

We’re not even gonna mention the two main men running for president. They’re not options. If you vote for them, you’re an idiot. And, you obviously don’t support gay rights, or any kind of HUMAN rights.

Nuff said on the The Orange One and The Dumb One With Poor Geography/Current Events Skills.

GET YOUR BALLOTS IN BY 8 PM TONIGHT!

As for Election Returns Parties, every bar/venue in town with a TV is probably going to be showing them but several venues are going out of their way with “special” events.

For our community and residents of Capitol Hill we’ll suggest:

Election Night with Brady at the Canterbury Inn up on 15th. Join Brady and his campaign team as results come in and hopefully a victory celebration will happen after he beats his opponent..though this race could be so close it might not be final for days.

PURR Election Night Party at the cool cocktail lounge on 11th on Capitol Hill offers up the queer surroundings of an LGBTQ space to view results….as does the The Biggest Gayest Election Party Ever at R Place on lower Pine Street who are promising some cleverly named drink specials:

CC Attle’s on Olive Way is also offering up a viewing party for another queer space option with their Election 2016 Viewing Party.

Just across the street from CC’s, Fred Wildlife Refuge is offering up a Election Day Cabaret,  It’s a FREE ALL AGES event! More poo:

The Stranger has the budget to put on a big fancy event at The Showbox….The Crocodile in Belltown has an event….EVERYONE is having an event.

OR, if you want to avoid results and just drink with drag queens while playing Family Feud, you can head to Unicorn/Narwhal for Family Feud with Isabella Extynn and Sparkle Leigh!!

As for us, we’re staying home balled up in a security blanket cocoon while sipping hot chocolate laced with tranquilizers and whisky. Or, hiding out in Taipei….just in case things don’t go well and we need to start “Taipei Gay Scene”.