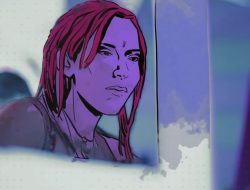 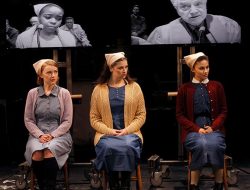 OOOOOOOOOOOH!!!! We love it when Judy’s Kids come to town!!!

(Yes, we understand only the ‘elderqueers’ will get these Old Skool references to Old Timey Gay Icons from Long Ago….deal with it!)

The 5th Avenue Theatre announced today that LORNA LUFT, singer and actress and Judy Garland daughter who is not her half-sister Liza Minnelli, will be one of the stars of their big holiday family musical production of Irving Berlin’s HOLIDAY INN onstage November 24 through December 31st.

(And, yes….we realize there are a few millennials out there who remember her from the movie, Grease II…)

More poo from the 5th Avenue about his casting coup and everything else you need to know about Holiday Inn. to Star in The 5th Avenue Theatre’s New Production of

Co-Directed by David Armstrong and James A. Rocco

Choreographed by James A. Rocco

This holiday season Lorna Luft, the beloved performer and daughter of film and television icon Judy Garland, will star as Louise in The 5th Avenue Theatre’s new production of Irving Berlin’s Holiday Inn, which began rehearsals this week. Luft joins a phenomenal cast of local and national talent including the previously announced Eric Ankrim, Sarah Rose Davis, Matt Owen and Taryn Darr for a dazzling winter treat that is perfect for the whole family. Also new to the cast is 5th Avenue favorite Richard Gray as Danny Reed as well as Caden Brauch and Kristoffer Holtan, who will alternate the role of Charlie Winslow. The 5th Avenue’s staging is the first production of Holiday Inn post-Broadway and will be co-directed by James A. Rocco and 5th Avenue Theatre Executive Producer and Artistic Director David Armstrong. Rocco will also choreograph.

“It’s very meaningful for me to be part of this production,” said Luft, who makes her 5th Avenue debut with Holiday Inn. “I’m grateful that I get to spend the holiday season immersed in the legendary music of Irving Berlin, a truly iconic composer and lyricist. As Jerome Kern said, ‘Irving Berlin has no place in American music. He is American music.’ I look forward to working with this exceptionally talented cast to bring this joyful musical to life in Seattle for the holidays.”

Irving Berlin’s Holiday Inn is a glorious new musical (inspired by the Oscar-winning film) that features 20 timeless Irving Berlin songs, including “White Christmas,” “Easter Parade” and “Blue Skies.” In this holiday delight, Jim leaves the bright lights of show business to settle down on a farm in Connecticut—but he finds the simple life is not as simple as he thought. Called “Heartfelt musical eggnog” by the New York Observer, Holiday Inn is a heartwarming treat, sure to put your whole family in the best of holiday spirits. This staging will feature the acclaimed sets and costume designs from the recent Broadway production.

Lorna Luft makes her 5th Avenue Theatre debut as Louise. Born to Judy Garland and producer Sid Luft, Luft began her career on her mother’s TV show. Her theater credits include Promises, Promises; Snoopy; Extremities; Guys and Dolls; Grease; Mame; Little Shop of Horrors; Girl Crazy; Gypsy; The Wizard of Oz and Pack of Lies. She has been seen on television and in film in Grease 2; Where the Boys Are (’84); Trapper John, M.D. and Murder, She Wrote. Luft co-produced Life with Judy Garland, the Emmy-winning miniseries based on her memoir Me and My Shadows. She celebrates her mother’s songbook in a one-woman show and CD, Songs My Mother Taught Me.

Eric Ankrim returns to the 5th Avenue Theatre stage to star as Jim Hardy. Ankrim appeared earlier this season as Harry Houdini in Ragtime. Select 5th Avenue Theatre credits include How to Succeed in Business Without Really Trying, Rodgers & Hammerstein’s Oklahoma!, Rodgers & Hammerstein’s Carousel, Jacques Brel is Alive and Well and Living in Paris, RENT, Into the Woods, The Rocky Horror Show and Miss Saigon. He made his Broadway debut in First Date, a production that began at The 5th and was seen in Come From Away (Seattle Rep). Ankrim’s work as a director includes The 5th’s hit productions of Grease and ELF – The Musical as well as American Idiot at ArtsWest.

Taryn Darr stars as Lila Dixon. She was last seen at The 5th as Mae in The Pajama Game. Her other 5th Avenue Theatre credits include A Chorus Line (Val), White Christmas (Judy), Catch Me If You Can, A Christmas Story, ELF, Paint Your Wagon and Monty Python’s Spamalot. She has performed regionally in Chicago (Roxie), South Pacific (Nellie), Legally Blonde (Brooke) and the New York City lab for Something Rotten!.

Sarah Rose Davis returns to The 5th to star as Linda Mason. Davis starred last season as Gladys in The Pajama Game and Holiday Inn marks her 23rd show with The 5th. Some of her favorite 5th Avenue Theatre credits include How to Succeed in Business Without Really Trying (Rosemary), Paint Your Wagon (Lotta), A Chorus Line (Maggie), Grease (Frenchy), RENT (Mark’s Mom), A Christmas Story (Mrs. Schwartz), Carousel and Jasper in Deadland (Hel). Her regional credits include Funny Girl (Fanny Brice) at Village Theatre and Beatsville (Betty) directed by Bill Berry at Asolo Repertory Theatre.

Matt Owen joins the cast to star as Ted Hanover, which marks his 20th show at The 5th. Previous roles at The 5th include ELF (Buddy), Rodgers & Hammerstein’s Oklahoma! (Will Parker), Monty Python’s Spamalot (Sir Robin), A Room with a View (Freddy) and many more. His regional credits include Yankee Doodle Dandy at Theatre Under the Stars and Joseph and the Amazing Technicolor Dreamcoat at North Shore Music Theatre.  As a writer, Owen’s play The Girl in the Park premiered in the 2010 New York Fringe Festival to great acclaim.   Owen also hosts an online travel show called Matt’s Travel Tips.

Richard Gray returns to the 5th Avenue Theatre stage as Danny Reed. Gray has spent the past several holiday seasons at Seattle Children’s Theatre in James and the Giant Peach, Dick Whittington, Chitty Chitty Bang Bang and The Lion, the Witch and the Wardrobe and is excited to be back at The 5th. His previous 5th Avenue Theatre credits include The Music Man, Monty Python’s Spamalot, A Room With a View and 5th Avenue/ACT Theatre co-productions of First Date, Assassins and Murder for Two (Gregory Award winner). Most recently, he was seen as The Nance at ArtsWest.

Caden Brauch and Kristoffer Holtan will alternate the role of Charlie Winslow.

David Armstrong is the Executive Producer and Artistic Director of The 5th Avenue Theatre where he has directed acclaimed productions of The Secret Garden; Paint Your Wagon; Candide; Oliver!; Sweeney Todd; Hair; Hello, Dolly!; Mame; White Christmas; A Little Night Music; A Room with A View; Company; The Rocky Horror Show; Pippin; Jaques Brel is Alive and Well and Living in Paris and Anything Goes. On Broadway, he directed the musical Scandalous, which he staged at The 5th under the title Saving Aimee. His direction and choreography have been seen at many leading regional theaters including The Kennedy Center, Ordway Center, Cincinnati Playhouse, Pittsburgh Civic Light Opera, St. Louis Rep, Dallas Summer Musicals, Ford’s Theater and Paper Mill Playhouse. As a playwright, he created the book for The 5th’s world premiere musical Yankee Doodle Dandy! and for two musicals for Theatreworks/USA: Gold Rush!, which premiered at New York’s Kaye Playhouse and A Christmas Carol, which played Off- Broadway at New York’s famed Lucille Lortel Theatre.

James A. Rocco returns to The 5th to co-direct and choreograph Holiday Inn. Previous 5th Avenue Theatre credits include Jesus Christ Superstar, Pirates, White Christmas, Sound of Music, Joseph and the Amazing Technicolor Dreamcoat, Wonderful Town, Singin’ in the Rain, and Yankee Doodle Dandy!. His Broadway credits include CATS, Wind in the Willows, The Wizard of Oz and his Off-Broadway credits include Streakin’! (created with Albert Evans), Nite Club Confidential and Sweeney Todd. Regionally he has directed and choreographed over 100 productions including 33 Variations, As Bees in Honey Drown, Damn Yankees, A Christmas Story, Grey Gardens, Love Janis (Ivey Award), In the Heights, Guys and Dolls (CT Critics Circle Award) and Smokey Joe’s (CT Critics Circle Award). His film/TV credits include There Are No Words (2 million viewers), Galaxy Express (3 million viewers) and The World We Create (Regional Emmy Nominee). He has worked on the recordings of And The Night Stood Still (FMQB Top 40 Hit), Smithsonian Gershwin Series, Revisited Series and concerts at Carnegie Hall and Lincoln Center. He was the lead singer for Duke Ellington’s Sophisticated Ladies, Herbie Hancock’s Super Stars. He received a Broadway Salutes award in 2013 and is the writer and host of Broadway Songbook Series (with Jeffrey Scott).

About the Music Director

About the Creative Team

Irving Berlin (Music & Lyrics) had a life that spanned more than 100 years, wrote a catalogue that boasts over 1,000 songs and ultimately epitomized Jerome Kern’s famous maxim that “Irving Berlin has no place in American music—he is American music.” He wrote scores to 13 Broadway musicals, contributed to seven revues, wrote songs for 12 classic Hollywood movie musicals and created many of the most well-known popular songs of the twentieth century. Born in Russia, he immigrated to the Lower East Side, where he started as a singing waiter and soon became a lyricist, composer and music publisher. An intuitive businessman, Irving Berlin was a co-founder of ASCAP, founder of his own music publishing company and builder of the Music Box Theatre to house his Music Box Revues. For his paean to his beloved country, “God Bless America,” he established a fund which receives all revenues from the song and distributes it to the Boy and Girl Scouts.

Gordon Greenberg (Book) recently directed the acclaimed West End revival of Guys and Dolls, which premiered at the Chichester Festival Theatre and transferred to the Savoy Theatre, where it received six Olivier nominations, and then to the Phoenix starring Rebel Wilson, while continuing on UK and international tours. Other work includes Working (revised with Lin-Manuel Miranda) for the Old Globe, Broadway in Chicago and 59E59 (Drama Desk); Jacques Brel is Alive and Well and Living in Paris (Outer Critics, Drama Desk, Drama League nominations); Williamstown; Paper Mill; Signature; Goodspeed; Huntington; Dallas Theater Center; Asolo; New York Stage and Film; and co-writing the movie musical Scramble Band for the Disney Channel. Current projects include The Secret of My Success for Universal (director/co-writer), Tangled for Disney (director), Port-au-Prince (writing with Kirsten Childs for The New Group), Heart of Rock and Roll (Huey Lewis), Assisted Loving (by Bob Morris) and co-writing Emerald City Music Hall, a new movie musical for Nickelodeon. Born in Texas and raised in New York, Greenberg has appeared as an actor on Broadway, Off-Broadway and on television. He attended Stanford University, R.A.D.A. and NYU Film School. Greenberg is a member of the Dramatists Guild.