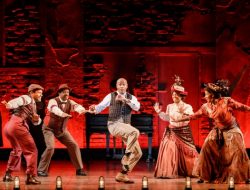 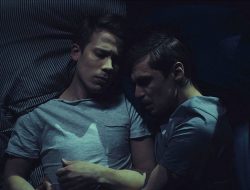 Theater has had a long love affair with the “pastiche” an artistic work that refers to/copies/imitates/pays homage/rips off another work of art in a loving way. Unlike parody (which is mocking and derisive to some degree towards which it mocks) pastiche is loving and appreciative of its parent…celebrating the magic that makes the original so special.

SOMETIMES, the pastiche can verge on the parody, especially when its subject is art that might be considered populist or coarse or of inferior quality. “Camp” is frequently associated with celebrating the irony of “bad art”  or the lowbrow in an aesthetic closely tied to drag queens, homosexuals and flamboyant performance styles. Frequently, the worlds of “camp”, “pastiche”, “parody” all collide in a swirling cauldron of delicious theatricality and great fun.

And, sometimes they don’t.

Which brings us to two local productions which just opened in Seattle within the last 10 days that both utilize elements of the camp/pastiche/parody but not always with great success. Scott Shoemaker as “Leonora Dottington” in BEWARE THE TERROR OF GAYLORD MANOR onstage at ACT through October 29, 2017. Photo by Eric Paguio/Design by Tim Harmon

First up: BEWARE THE TERROR OF GAYLORD MANOR, the ridiculously named new show from the mind of drag queen impresario BenDeLaCreme, the very popular Seattle performer/producer who has achieved national attention for appearing on Season 6 of the hit show “RuPaul’s Drag Race” (and, was just announced as a contestant on the already filmed/soon to air “All Stars 3” edition of that show). “DeLa” as they are known to fans, is also beloved in Seattle for creating and producing several popular long running/recurring drag/burlesque variety shows including the extremely successful “Homo for the Holidays” which plays for several sold out weeks every December.

This new production is a step up for BenDeLaCreme in several ways. It’s being produced at ACT as part of their ACTLab program in their Bullitt Cabaret space and this new show is definitely aiming to be more of a traditional play with a more complicated plot than previous shows done by the star which are, frankly, variety shows that link together with a vague through line. “Gaylord Manor” is attempting an actual plot with committed characters relating to one another. Yes, there are still music/dance/burlesque style numbers scattered throughout the show, but instead of dominating the evening as they do in shows like “Homo for the Holidays”, the plot line in “Gaylord” is dominant to the production numbers. Or, attempts to.

And, there lies the main issue with “Gaylord Manor”…it doesn’t have a very good script. BenDeLaCreme’s great gifts as a performer, host, and producer also extend to creating the previous shows in the “DeLa” universe. But creating a through line in which to hang the acts in a variety show is a different beast than creating a plot/dialogue heavy show. “Gaylord Manor” suffers from a weak scenario that includes a messy and not particularly funny opening and a prolonged, messy and not particularly funny ending. The plot is basic “heroine sucked into macabre world of a remote haunted house” and the script borrows much from famous haunted house films like the classic psychological horror film, Robert Wise’s 1963 “The Haunting” and James Whale’s deliriously wonderful 1932 horror film, “The Old Dark House” among them, if not a bit of various “Abbott & Costello Meet The Famous Monster of Choice” films from the 1940s. These are all great sources for homage for a theatrical pastiche but it never quite comes together. The idea is sound but the script needs a lot of fine tuning.

Surprisingly, the chief issue with the script was the writing of the main character Patsy Jejune, played by the writer/producer/star! BenDeLaCreme might have been over stretched on commitments here because Ben as writer short shrifted Ben as star. “Patsy” isn’t that developed as a character and frankly she isn’t given enough funny business to do which becomes apparent when local actor Scott Shoemaker makes his entrance onstage as his drag character “Leonora Dottington”, a drily vulgar psychic who may or may not have the hots for Patsy, immediately steals the show with his very funny performance which also includes some funny writing FOR the character.

The plot, as is, centers on Patsy stumbling into creepy remote Gaylord Manor after the obligatory car break down and possible savage attack by…something hairy. The very queer owner of the Manor, “Count Baron Von Gaylord” (a funny performance from “Major Scales” aka Richard Andriessen who is also somewhat underused here) welcomes her into spending the night, but it’s far from restful as various eerie creatures inhabiting the household will insist on performing colorful and frequently clever dance/burlesque numbers. The arrival of Leonora and her husband Dr. Dudley Dottington who DOESN’T believe in the occult adds to the chaos.

The main problem with the script is that it (hopefully) aspires to be at the same caliber as other classic drag/camp/pastiche shows created by great drag impresarios like the late Charles Ludlam and the still very much with us Charles Busch but it’s a VERRRRRY long way from the brilliance of Mr. Ludlam’s “The Mystery of Irma Vep” or Mr. Busch’s “Psycho Beach Party” or “Die, Mommy, Die!”

(Uh, here’s a great idea: why not do “Irma Vep” with BenDeLaCreme and Jinkx Monsoon?)

It’s all very colorful with some clever set, prop and costume design (a trademark of BenDeLaCreme’s shows). The staging (also by BenDeLaCreme) is awkward at times due to the layout of the Bullitt Cabaret space and the scenic design. Unfortunately the chairs in that space do not pivot so you’ll have to physically re-situate yourself to prevent from giving yourself whiplash while watching the action unfold.

There are things to admire in “Gaylord Manor”…the design, many of the dance numbers, Scott Shoemaker’s hilarious performance…but, it’s obvious that BenDeLaCreme hopes this show becomes a yearly tradition/income stream like his “Homo for the Holidays”. Since this show is now sold out for the rest of its run, it’s likely it could return in the future but if it does, I hope it’s after a serious rewriting of the script. Meanwhile, up the Hill at Annex there’s a similar camptastic sendup happening, and this one is mixing up a couple different genres. Local playwright Kelleen Conway Blanchard’s LAST STOP ON LILAC is set in 1960s Hollywood and centers on a vapid group of fame hungry Hollywood actors and wannabes all trying to climb/stay on the Fame Ladder and willing to resort to blood sacrifice and demon summoning to achieve their goals. It’s like the ultimate American International Pictures/Hammer Studios mash up movie from that era featuring white booted go go girls doing the Pony while starring in cheap movies starring race car driving chimps and simultaneously worshiping evil beings from another dimension. There’s also plenty of sexy hijinks including a closety gay actor couple and a pill popping fading diva with lesbionic tendencies and her Teutonic maid.

It SOUNDS like great fun and at times it IS great fun but only furtively for brief moments. Kelleen Conway Blanchard has a great gift for this kind of play writing…she’s great at dialogue and crazy plotting and she’s obviously well versed in films/pop culture from previous eras. One of her hugest successes was the delightful “Kittens in a Cage” from a few years back that paid loving homage to all these “women in prison” movies from the past. She’s attempting the same kind of hip, edgy winking snark here with “Lilac” but it comes up short largely due to a script that is FAR too long and overly complicated for the genre it’s supposedly aping. Low brow “B” movies pretty much always tended to be a brisk 80 to 90 minutes or so and “Lilac” is a two act show with a 7:30 start time that didn’t end until about 9: 45.  There’s an excessive amount of repetition in this play that just bogs it down.

It also suffers from a bare bones production. Annex has usually been good with stretching a dollar and turning tissue paper and rags into fun, DIY sets and costumes but this show feels a bit thread bare. It also suffers from weak lighting design which includes a vital staging area pretty much lacking in any designed lighting. It feels a bit sloppy and underachieved.

There are some very funny performances here but the cast does seem a bit out of control. Director Keira McDonald lets them go too far and too extreme at times….it all feels messy. And, despite funny work from Danielle Daggerty as the dotty diva “Veranda Mink” and Tasha Kay Newell’s sly “Tina Topps” a conniving young actress, there really isn’t a performance that centers this production. Frankly, this show needs some contrasting bits of help: One, more structure (and a shorter simplified script) and secondly, it really could use a drag queen (or king) or two to give it a bit of ooomph.

The irony here is, that BenDeLaCreme’s drag heavy BEWARE THE TERROR OF GAYLORD MANOR could use better dialogue/plot/jokes and Kelleen Conway Blanchard’s LAST STOP ON LILAC could use some draggy sparkle, glitz and star power.

That show could be AMAZING!