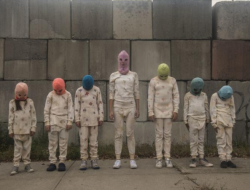 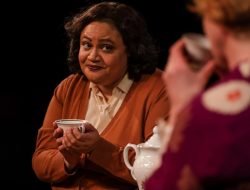 With a slight hint of nuttiness and depth of flavor.

PEERLESS is the very interesting newish play by emerging playwright Jiehae Park that’s comedic but also not since it deals with some rather vile characters doing some very awful things to achieve want they want. It’s frequently very very funny but it’s also dramatic at times, and touching, not to mention menacing and more than a bit mean.

It’s not unlike an especially dramatic episode of “RuPaul’s Drag Race”….

It’s Ms Park’s clever reworking of Shakespeare’s over the top tragedy, Macbeth but reworked to be contemporary and instead of a murderous but weak Scottish lord and his ambitiously amoral wife, the nasty duo at the crusty heart of Peerless are twin sisters of Asian descent, in high school and plotting how to get into an Ivy League college and willing to do ANYTHING to achieve their goals. Fortunately, Ms Park only uses Macbeth as a loose framework on which to hang this story…it never gets bogged down by trying to slavishly recreate every Shakespearean moment.

Here, they are named “M” (for Macbeth) and “L” for (Lady Macbeth) and as the play opens, senior student/sister “M” is furious she hasn’t received early acceptance/guaranteed admission into the never named Ivy League college she is so desperate to go to. Instead, an awkwardly odd male seemingly white nerdish student named “D” (for Duncan in Macbeth) snags that slot and both “M” and “L” plot how to change the situation to their benefit. (Note: the sisters worked out years earlier for “L” to be held back a year in school so they wouldn’t have to compete for the same spot in college.)

Since “M” has broken up with her boyfriend “BF” in a pique of anger, she manages to become  “D’s” date for a school dance with “D’s” special needs brother as an off stage escort for “L” who is pressuring “M” to actually kill “D” so his early admission’s spot goes to “M”.

It’s hard to discuss too much more of the plot of Peerless without spoiling the suspense but you do need to know there’s another important character in this five actor cast, the malevolent and prophetic grunge/goth student named “Dirty Girl” who alternately warns/threatens the “M/L” sisters and acts as a proxy for the Witches in Macbeth. It’s a very taut 90 minutes of high school terror/tragedy and dark comedy and Ms Park has managed to create a clever script that manages to carefully balance all those disparate elements. It’s not easy balancing the snarky humor, and nasty over the top behavior of the Sisters with the pathos of some of the other characters but Ms Park manages to pull it off. Both “M” and “L” are monsters but the playwright does give them some interesting depth and dimension while she cleverly plays with stereotypes about overly ambitious Asian students as well as attitudes TOWARD Asian Americans. And, she gives both the “D” character and “Dirty Girl” terrific plot lines and some terrific dialogue.

My only issues with the Peerless script itself is the fact that the boyfriend character, “BF” is rather seriously under written. The character performs a necessary function in the plot but other than that, he isn’t given much to do or anything very interesting to say or do within the confines of that plot. A small scene or bit of dialogue giving the character a bit of depth and richness wouldn’t harm this play…as is, the fact “BF” is the only bland character in a show with only 5 actors does stand out a bit.

I also think some of “M’s” character transitions could be handled a bit smoother. Like Macbeth, “M” has ambition but also has doubts and some feelings of compassion for their victims. Some of those emotional transitions feel overly abrupt within the confines of this script.

That said, the delicious intrigue of Peerless and the fascinating characters created here, are reason enough to enjoy this play. The central relationship between the two sisters is fascinating but Ms Park has created a fantastic supporting character with “Dirty Girl” and an emotionally complex and beautifully written one with the awkwardly adorable character of “D”.

And, ArtsWest has produced a strong and captivating production of Peerless with a smart and talented cast of 5 young actors with very strong design elements and a skillfully executed job of staging from Seattle actor Sara Porkalob who somehow managed to direct not only this production of Peerless at ArtsWest, but also a completely separate production of the play Straight White Men at Washington Ensemble Theatre over the same time frame. I wasn’t too fond of that production but I’m a huge fan of this one. We already knew Ms Porkalob was a skilled actor and writer but now we know she’s got directing chops, too.

The cast is a chief highlight with strong work from Corinne Magin (as “M”) and Maile Wong (as “L”) the malevolent sisters in crime at the center of Peerless. Ms Magin is appropriately waffley as the Macbethian character who has to swing from raging to sympathetic rather abruptly while the steely fury of Ms Wong’s particularly vicious “L” is a pure acting delight.

As mentioned before, I think the “BF” character is rather woefully underwritten by the playwright but Jonathan Keyes does a great job with the brief moments he does have onstage. We just need to see a bit more of this character and the actor.

But, since Jiehae Park created such vivid characters with “D” and “Scary Girl” both Christopher Quilici and Erin Bednarz have the added advantage of such terrific scenes to play and some complexly smart dialogue. Ms Park’s beautifully composed monologues that essentially explains so much about “D’s”  character and back story are superbly performed by Mr. Quilici who gives a powerful and poignant performance of a teenaged boy with a lot of pain in his life. I’m not familiar with this actor but after this performance I do want to see more of what he has to offer.

He is matched by Erin Bednarz’s deliriously perverse work as the “Dirty Girl” who skulks and schemes behind the scenes and matches wits with the calculating “M/L” Sisters…it’s a very entertaining and skilled performance that manages to be very funny as well as seriously menacing at the same time. Erin Bednarz has contributed many sound designs for productions in Seattle but maybe it’s time to start adding more acting gigs on that resume….

A huge thumbs up for Peerless, both as a play and a production by ArtsWest. If you enjoy sly, edgy material with a bit of bite and social commentary as well as moments of poignancy and dramatic power, then Peerless is the perfect fit for a chilly wintery evening of theater.