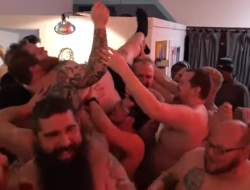 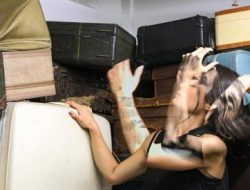 That’s the basic plot of RIDE THE CYCLONE, this year’s annual co-production between the 5th Avenue Theatre and ACT, where the two mega theaters join forces to stage smaller scale musical theater works at one of ACT’s more intimate stages. Ride The Cyclone is actually a Canadian creation that originated from a small cabaret theater company in Victoria, British Columbia over 15 years ago that has been further expanded over the years in various productions including a staging at the Chicago Shakespeare Theater and a subsequent production at MCC in New York with director Rachel Rockwell guiding both those productions as well as this remount with the 5th Avenue and ACT here in Seattle.

And, the show really is about a sextet of Canadian teens, all part of their parochial high school show choir, who all tragically die in a terrible accident on a roller coaster at a local amusement park. But, due to the machinations of a the 7th character in the show, the oddly sentient mechanical fortune teller “The Amazing Karnak”, the six teenagers end up in a Purgatory where they have to prove themselves worthy of going back to the Land of the Living…but, the catch is, only one of them will get that chance after “stating their case” with a series of performances.

And, as I write that and you read it, it all sounds sort of funny and creepishly charming and cleverly original…until you actually start to think about that premise.

And, then it all becomes a bit…”WTF?” Because, the plot really doesn’t make ANY kind of sense…WHY does “The Amazing Karnak” have these powers? Why were these kids pitched into this weird Purgatory? Why is one of the six kids only known as “Jane Doe” and played as a weird doll like zombie? (The explanation is, that Jane Doe was beheaded in the accident [fun!] and thus not identifiable…even though the show is roughly contemporary and the action takes place in a smallish Canadian provincial town that is apparently lacking in school records, DNA testing or common logic…SUSPEND YOUR DISBELIEF, FOLKS!!!)

So….this plot makes absolutely no logical sense. The songs are….a mixed bag ranging from “Not very memorable” to “Not actually needed” to “Somewhat enjoyable but that’s mostly due to the clever staging/choreography of Rachel Rockwell”.

It’s very, very entertaining (despite the fact the story doesn’t make any sense) and the artists behind this production have created some of the best stagecraft seen on a Seattle area stage in years. Ride The Cyclone is a carnival colored sideshow of brightly garish neon lights and a cacophony of hurdy gurdy sounds and beautifully staged individual moments utilizing all sorts of theater magic.

Yes, there will be numerous quick changes, multi-media effects and physical special effects to delight the eye and ear!

The staging by Ms Rockwell is very clever and artful…all the design elements are fantastic, including Scott Davis’s scenic design, Theresa Ham’s costumes, the lighting design by Gregory Hofmann and the sound design by Christopher Walker. The wonderful projections and films used are by Mike Tutaj. The show just looks like what big, crazy, magical theater pieces SHOULD look like, but sadly, seldom do because theater companies are either too poor or too cheap or too lazy to attempt them. If anything, this production should be a wake-up call for Seattle area theaters to up their game when it comes to presenting exciting theatrical works. This entire production is largely a recreation of the earlier productions in Chicago and New York…it’s not actually very local. It would be nice to see some of our area theaters occasionally make more of an effort when it comes to artistry and stagecraft when it comes to area productions that are more on the fantastical side. Yes, it can be a drain on resources but Seattle actually has small fringe companies that have produced clever theatrical tricks on non-existent budgets (both Annex and Washington Ensemble Theatre have done wondrous shows with very little). It would be nice to see some of the big houses figure out how to similar things with their bigger budgets and staffs on occasion.

Ride The Cyclone also has a delightful cast of young actors playing the six teens including a terrific star turn from Lillian Castillo, the “sweet” girl  Constance Blackwood in the shadow of her self-centered, bossy friend Ocean Rosenberg, also nicely played by Tiffany Tatreau albeit in a role that’s a bit obnoxiously overwritten. Canadian actor Kholby Wardell plays the gay kid Noel, a role he actually originated in the early Canadian productions and it’s a funny, confident performance….which is logical since he’s been playing it for years!

Two actors with local connections have also joined this production: the very familiar face of Adam Standley amuses as a Ukrainian teen with a sad back story, as does Connor Russell, familiar for a previous role in the 5th Avenue’s “The Little Mermaid” as Ricky, a handicapped teen who develops new found abilities in the Afterworld. Both give funny performance though neither of them gets a decent song to sing.

The actor with the best production number is “Jane Doe’ played by Emily Rohm as a waxy doll with a zombie like gait and a terrific song to put over that includes all sorts of clever tricks. It’s the highlight of the show along with the very funny, deadpan performance of Karl Hamilton, heavily concealed in a puppet like masked costume as the “Amazing Karnak”. I don’t think the character actually makes much sense in the confused plot of this show, but the character is highly engaging with all the best lines, and Mr. Hamilton’s dryly humorous take on Karnak is a real treat.

So…the songs are a mixed bag and the plot is confused and not particularly logical but the charm of the characters and the actors playing them and the sheer spectacle of the stagecraft and design elements manage to make Ride The Cyclone worth checking out for an evening of light weight fun.

If you’re looking for depth of plot and a logical progression to a story, then probably not the show to see.