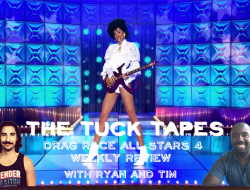 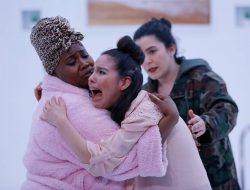 WET’s New Production of Guillermo Calderón’s “B” Explores The... Yes, holiday theatrical shows are delightfully fun (hopefully) but six weeks of non-stop campy holiday show featuring various homos and drag queens and go go boys and butt crackers all prancing about area stages is exhausting (and expensive). Thankfully, we’ve made it past Twelfth Night and tossed the Xmas trees into the dumpster (if you haven’t….go do it right now) and it’s time to get back to boring old regular theater minus any holiday trimmings.

I keed, I keed. The first major openings of 2019 have some very lovely trimmings and may (or may not) be worth of your attention.

Up first, Seattle Shakespeare Company kicks 0ff 2019 with a rarity…a production of a lesser known Shakespeare play, ALL’S WELL THAT ENDS WELL, a problematic romantic comedy that includes the usual array of Shakespearean star crossed lovers, improbable disguises and subterfuges and not just one clown character but two. On the plus side, “All’s Well…” has a unusually strong line-up of powerfully written female characters including the lead role of Helena who drives the plot of the play with great intelligence and cunning…though it might be argued it’s all rather a waste, since all her brains are being used to trap a man who’s not worthy of her attention.

In a nutshell, Helena is an impoverished orphan of a famed doctor and now a ward of the lovely and kind Countess of Rousillon who has a son named Bertram that Helena loves with all her heart. Bertram is called to the court of the ailing King of France and Helena decides to follow her infatuation to Paris in order to hopefully gain his attention. With her, she brings strong medicines created by her father and manages to cure the King who has promised to allow Helena to pick any man of the court to be her husband if she is able to cure him. The medicines work and the King keeps his promise and Helena naturally picks Bertram…who is furious that he is to be saddled with his mother’s pretty but poor ward as his bride. He refuses to consummate the marriage and runs off to Italy to participate in military campaigns and vows to not return until Helena is dead.

Proving she’s not a quitter (or, totally emphasizing that she is a mad stalker) Helena follows him to Florence where she finds that Bertram is wooing local young virgins. Helena befriends the chief desire of Bertram’s groin and tricks him into sleeping with her by pretending to be the other girl. Helena then spreads word that she has died, and Bertram returns to Paris and the court of the king expecting to be able to be free to find a wealthy heiress to marry as his second wife. Naturally, all is revealed, and not surprisingly, the play ends happily (albeit unrealistically) ever after. All does end well.

(Oh, and there’s an annoying secondary “B” story line involving Parolles, a vain glorious soldier and cohort of Bertram’s who gets into a lot of trouble with his shenanigans. AND, the Countess of Rousillon’s household includes ANOTHER clown, named Lavatch so there’s two bozos chewing the scenery, sometimes both onstage at the same time…more on them later.)

So, sitting through All’s Well That Ends Well you kind of get some of the reasons why it’s not one of the more successful or frequently produced plays by Shakespeare. It’s an odd story and unorthodox in its plotting and characterizations…it’s definitely on the light side. It was also rather a controversial one, in its day and long after as it centers on a woman character being bold and cunning and deceitful and smart which is unsettling as a narrative for many audiences…women aren’t supposed to behave like this! But, it’s also obviously kind of an empowering way to tell a story and to feature a woman being…gasp….bold and assertive! Ideally, she wouldn’t necessarily waste her talents on trapping such an unworthy twit as Bertram but it’s still rather refreshing to see such a strong female character.

But the fact that she’s a trifle predatory can be seen as off putting…in modern terms, she’s catfishing the hell out of Bertram with her disguises in bed to fool him into (spoiler alert) impregnating her. Girl is DETERMINED to snag her man!

All in all, All’s Well That Ends Well is minor Shakespeare despite the delights of some strong female characters (including the Countess of Rousillon who is annoyed that her son is such a twit) and the wily Diana, the Florentine virgin who conspires with Helena to fool Bertram. I don’t really have a need to ever seen another production of it again and I’m very thankful that this particular production was under the direction of Victor Pappas, a reliable and talented Seattle theater artist who has done a good job of staging this odd play. Under lesser hands, this could be a tough show to sit through but Mr. Pappas has both the talent and a strong cast to make this production worth visiting.

It’s really the direction and some of the performances that make this all work. Keiko Green makes for a strongly resourceful Helena; it’s a clear headed, determined performance. She nicely grounds the character thus making her more of a reasonable person and less a mad stalker type.  And, despite the fact the character is a real prat, Conner Neddersen is able to give his Bertram enough shadings to make him at least somewhat likable, in a role that’s written to be shallow and petty until the last 2 minutes of the play where he has to do a 180 degree turn in his attitude toward Helena. The duo make for an appealing couple.

There’s also strong work from R. Hamilton Wright as Lafew, a lordly courtier to the court and a very funny opponent to the rascally Parolles character. Suzanne Bouchard is serenely good as the Countess while Michael Winters delights as usual as the King, sickly and frail and a bit kvetchy in the beginning but robustly wrathful later on after good health is restored. His summing up at the end of the play is worth sitting for the 2 and a half hours of confounded storytelling before it.

And, Heather Hawkins adds some needed energy into the second half of the play with her robustly and cheerfully loud landlady/Widow and mother to the virginal Diana, played by Ayo Tushinde with intelligence and strength equal to Keiko Green’s Helena. The women of All’s Well That Ends Well are its chief asset.

The only major shortcoming for me are the two clownish characters and to be honest, I find myself thinking that about many of Shakespeare’s intentionally comedic/clown figures…they just never ring true to me as that funny. It’s always forced and annoying “Look at my clownish buffoonery!” And, yes, I’m well aware it’s part of the style of Shakespeare and of that time in theater but…meh. And, to be equally frank, my disdain is frequently rooted in the performances of these characters. So often, it tends to be actors trying too hard for the laughs and that’s what it feels like here. I wasn’t that in love with either George Mount’s portrayal of Parolles or Keith Dahlgren as the clown, Lavatch for those very reasons. And, the Parolles subplot always felt like it could be vastly trimmed down (he has a big scene towards that end that just went on far longer that it needed to). Heather Hawkins as the Widow and Bob Wright’s Lafew both grabbed more legitimate laughs than either of the clown characters.

So…who is this for? The usual suspects: Shakespeare fans and especially ones looking to check off the seldom produced plays. Fans of strong female characters. Folks looking for any new production not involving drag queens enjoying the holidays at $40 a ticket.