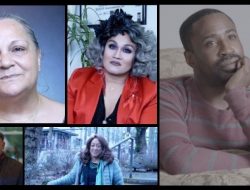 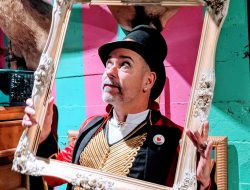 Tom Orr Is Back In Seattle With Another Fabulous... The 5th Avenue Theatre has snagged yet another “New Musical Hopefully Broadway Bound” for the 2019 holiday season. The musical theater company became a favorite of Broadway theater producers back in 2002 after Hairspray the Musical had a hugely successful tryout period at the theater prior to its triumphant multiple Tony Award winning debut in New York. Since then, many shows have done tryouts ranging from notorious flops like Lone Star Love, the infamous musical that actor Randy Quaid rampaged through, to other Tony Award winning hits like Memphis.

Now, it’s Mrs. Doubtfire’s turn. The very popular 1993 movie that starred Robin Williams as a desperate dad who resorts to disguising himself as a British nanny in order to spend time with his kids, is being musicalized (like every other film hit of the last 30 years…) with an impressive line-up of theatrical talent on board. The 5th Avenue announced today that Mrs. Doubtfire the Musical will bop into their Seattle theater from November 26 thru December 29, 2019. It will replace the already announced Shrek the Musical in the 5th Avenue’s 2019/2020 season (Shrek will be bumped to the holiday 2020 slot).

Mrs. Doubtfire the Musical has some major talent attached including Wayne and Karey Kirkpatrick the fraternal team who wrote the music & lyrics for Broadway hit Something Rotten! will do the same for ‘Doubtfire’ with fellow Something Rotten alum John O’Farrell writing the book with Karey Kirkpatrick. Tony Award winning director Jerry Zaks is on board to stage this new show with Lorin Latarro (Waitress) tapped to  choreograph and Ethan Popp (Tina) serving as Music Supervisor.

No cast has been announced for the Seattle production. An industry reading was held in New York in May which included Rob McClure (currently on Broadway in Beetlejuice the Musical) and Kate Baldwin in the Sally Field/ex-wife role, with out gay actor/comedian Mario Cantone reading the role of Frank, the brother of the main character Daniel/Mrs. Doubtfire, the role played by Harvey Fierstein in the original film. Cantone is married to Village Theatre’s artistic director Jerry Dixon so we’re kinda figuring/hoping that Cantone MIGHT be coming to Seattle but…we’ll see.

More info below and certainly more info to come in the future:

Based upon the Twentieth Century Fox Motion Picture

Performances will begin in Seattle on November 26, with a December 13 opening; it will run through December 29.

Casting, additional creative team, and a production timeline will be announced later. Mrs. Doubtfire is presented by special arrangement with Buena Vista Theatrical.

Fix your wig and slip on this pantyhose, dear, ‘cause Mrs. Doubtfire is strutting to the stage!  Based on the beloved 1993 Twentieth Century Fox film, Mrs. Doubtfire is the laugh-out-loud hilarious and heartfelt story of newly divorced and out-of-work actor Daniel Hillard.  After losing custody of his children, Daniel disguises himself as Scottish nanny Euphegenia Doubtfire and takes a job in his ex-wife’s home in a desperate attempt to stay in their lives.  As he gets lost in his new persona and grows closer to his kids, Mrs. Doubtfire teaches Daniel more than he bargained for about how to be a father.

Mrs. Doubtfire is currently only available as a part of a 2019/20 subscription.

Tickets for Mrs. Doubtfire will be available for Groups of 10 or more on Monday, June 10