Summer Is (Mostly) Over But The 5th Avenue Theatre... 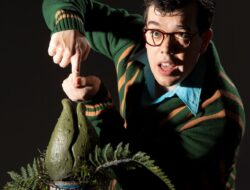 Seattle Theater In September Is Up and Running With...

It’s only about 5+ weeks away at this point so it’s time to gear up for the 27th annual Seattle Queer Film Festival happening October 13 through the 23rd at venues around the city and online as well. Three Dollar Bill Cinema, the producers of the festival are ready to announce the opening and closing films for this year’s festival…and, they’ll announce more films and events at a big Preview Party they’re having on Sunday, September 11th at Elsom Cellars in SoDo.

But, first up, this year’s opening night film will have a local focus with the world premiere of the locally produced and themed documentary, WHAT THE FUNK?! which tells the story of the first What the Funk?! BIPOC Burlesque Festival which happened in August of 2019. More from the press release:

The Seattle Queer Film Festival will open on Thursday, October 13, at Capitol Hill’s Egyptian Theatre with the world premiere of the new locally produced and directed documentary, WHAT THE FUNK?!. This love letter to the POC community is the story of the inaugural What the Funk?! BIPOC Burlesque Festival, held in Seattle over three days in August 2019. The film follows producer and founder Kia Puckett, aka Mx. Pucks A’Plenty, in this labor of love as they explore what it means to rewrite the rules of burlesque to build a supportive community of performers for personal and professional development.

The 27th annual film festival will wrap up on Saturday, October 22nd with the U.S. premiere of a new film from Canadian filmmaker Jason Karman, GOLDEN DELICIOUS, a “classic queer first love story set in the social media-obsessed digital age, the film centers on high school senior Jake, who, to his father’s delight, tries out for the basketball team after he meets his new basketball-obsessed and openly gay neighbor, Aleks.”

Get a sneak peek of the festival’s opening and closing night films, see trailers for other festival films, and learn about SQFF’s queer magic theme at the Seattle Queer Film Festival Preview Party happening September 11 from 4:00-7:00 PM at Elsom Cellars, 2960 4th Ave. S., Suite 114. Food will be provided by Terra Plata, wine from Elsom Cellars will be served, and local vendors will be selling tarot readings, crystals, plants, apothecary, and more. This event is free and open to all ages. RSVP is requested at https://tinyurl.com/sqffpreviewrsvp.

Early bird discounted festival passes go on September 1, and can be purchased at https://tinyurl.com/sqfftix. Passes range in price from $100 – $175, and these prices will increase on September 14 when the full film festival lineup is revealed and tickets go on sale.

WHAT THE FUNK?! A love letter to the POC community is the story of the first What the Funk?! BIPOC Burlesque Festival, held here in Seattle, Washington, over three days in August 2019. Follow producer and founder Kia Puckett, aka Mx. Pucks A’Plenty (the Femme Daddy your mother didn’t know to warn you about), in this labor of love as they explore what it means to rewrite the rules of burlesque to build a supportive community of performers for personal and professional development. See excerpts from live festival performances as well as intimate behind-the-scenes footage. Hear performers speak about the inspiration that drives their performances and lingering challenges to inclusivity and accessibility. Explore what it means to question cultural norms, utilize the body as an artistic medium, and live life on one’s terms.

Everyone wants something from high school senior Jake: his father is pushing him to try out for the basketball team, and his girlfriend wants to take their relationship to the next level. When Aleks, a handsome, basketball-loving, shamelessly-out gay kid, moves in across the street, Jake’s world turns upside down, sending him headfirst into the throes of jock-dom. With a sensitive hand, director Jason Karman explores the innocence and trepidations of falling in love for the first time. Karman gives us a contemporary queer love story that doesn’t narrow its focus but instead broadens it to include important notes on family, legacy, and authenticity. Set in the modern digital age, Jake and his friends are finding themselves through social media, forging real connections, and figuring out who to take to the prom.

ABOUT THREE DOLLAR BILL CINEMA
Three Dollar Bill Cinema fosters deeper community engagement by showcasing queer film programming, educational experiences, and social dialogue. We provide access to films by, for, and about lesbian, gay, bisexual, transgender, and queer (LGBTQ+) people and their families and a forum for LGBTQ+ filmmakers to share and discuss their work with audiences. We curate themed screenings throughout the year and produce programs in partnership with other arts, cultural, and service delivery organizations in the Greater Seattle area. Programs include Translations: Seattle Transgender Film Festival, Three Dollar Bill OUTdoor Cinema, Reel Queer Youth, and the Seattle Queer Film Festival.